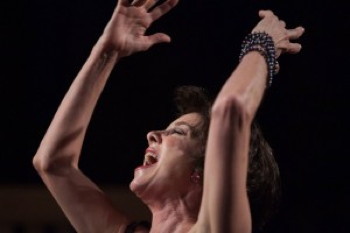 A few of us from the Weekly wrote about our

Mine was from the opening night performance of Vivien, starring Judith Chapman.

Opening night of Vivien, Fri., Aug. 12, Rogue Machine’s intimate black-box theater was jammed with fans of either Vivien Leigh or soap star Judith Chapman, who was acting her heart out portraying the legendary actress in Rick Foster’s bioplay. All was going well until I was attacked by an irate theatergoer — who stole my notes.

Throughout the one-act performance, the two elderly fellows sitting in the front row, right in front of me, were visibly irritated by the usual incidental sounds you hear during an opening night, such as a photographer quietly taking snaps and various critics making notes. At one point a random loud noise startled them to the extent they both almost jumped out of their seats.

Note: When I am in the theater, I recognize that anything can happen. I am ready for the unexpected.

Not these guys. They turned to glare at me several times, clearly annoyed by my note-taking. Halfway through the histrionic one-woman show, one of them finally exploded and hissed, “Can you stop scribbling?!” As I don’t like to talk during a performance, my succinct reply was a whispered, “Sorry. Can’t.”

Infuriated, he then tried to grab my pen out of my hand and, failing that, snatched up half of my papers, which he then passed to his companion.

At the conclusion of the play, he did apologize for being rude. I, in turn, apologized for disturbing them. But when I asked for my notes back, they feigned innocence and headed for the exit. I thought I would find them under his seat so I let them go, but my notes had departed.

OK, guys, I get that you’re huge fans, but if you’re so bothered by photo-snapping and note-taking, do you have to be so appallingly rude and petty about it? Confiscating my notes? Not cool. —Pauline Adamek