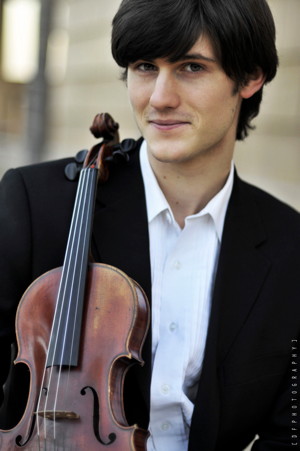 Armstrong, a finalist in the 2011 International Tchaikovsky Competition, held every four years and considered “classical music’s equivalent of the Olympics” (Los Angeles Times), has been hailed as “gifted” and “blazing” (Chicago Tribune).  The California native and recent graduate of The Colburn School Conservatory of Music performs Mozart’s stunning Violin Concerto No. 3 in G major, K. 216.  This is the fist time Armstrong has performed publicly in California since being named a finalist in the prestigious competition and marks his LACO debut.

In addition, Shulman conducts Mozart’s Symphony No. 29 in A major, K. 201, and the virtuosic Sonata for Strings by British composer William Walton.  Sonata for Strings, a transcription of Walton’s 1947 String Quartet in A minor, was commissioned in 1971 by Sir Neville Marriner for the Academy of St. Martin in the Fields, and LACO gave the US premiere two years later under Marriner’s baton.

Regarding Walton’s piece Shulman notes, “It’s a work I’ve known since my early student days.  I recorded it in its original version for string quartet in the 1990s with my Britten String Quartet.  The Academy and Neville made a stellar recording of Sonata for Strings in 1972 with Walton, himself, present at the sessions.  He and Neville made a few changes that have been handed down through the decades.  I’ve gathered them all for this performance with LACO.  It’s a tremendous piece.  The first movement swings between gorgeous, melancholic lyricism and jagged, emotional rhythmic outbursts.  The second is a fast, tense, incredibly virtuosic scherzo, incorporating jete (bounced bow) and col legno (with the wood of the bow) bowing and trills.  The third is a beautiful slow movement with heart wrenching violin, viola and cello solos.  The final movement is a wild ride, incorporating what were at that time mold-breaking, almost rock-like rhythmic undercurrents, ending with five 16th notes played, in a flash, by the entire orchestra in unison.”

(Discounts for groups of 12 or more, seniors 65+ and college students, if available;

Also available to students: $25 “Campus to Concert Hall All-Access Pass” – good for all 7 of LACO’s Orchestral Series concerts at either the Alex Theatre or Royce Hall and for all three Westside Connections concerts at The Broad Stage, plus other benefits)

Tickets also on sale at the theatre box office the night of the concert, if available.

One hour before curtain, pre-concert talks provide insights into the music and artists.  Free for all ticketholders

Twenty-one-year-old Nigel Armstrong recently came to international attention in 2011 as a finalist in the 14th International Tchaikovsky Competition, receiving Fourth Prize and winning the Prize for Best Performance of the Commissioned Work by John Corigliano with Stomp.  In 2010, he had silver-medal wins in the Yehudi Menuhin International Violin Competition, held in Oslo, Norway, and the First International Violin Competition in Buenos Aires.  In both competitions, he received additional prizes, including the Premio Tango in Buenos Aires and the Ole Bull and Nordheim awards in Oslo.  In 2008, Armstrong received multiple prizes in the Corpus Christi International Competition, including the Howard Beebe String Award for Solo Bach Performance and Jean ten Have Award for Violin Performance.  Since his solo debut with the Baroque Sinfonia in 2002, Armstrong has performed concertos and showpieces with the Boston Pops and Norwegian Radio orchestras; the Reno and Burbank philharmonic orchestras; the Berkeley and Downey symphony orchestras; Bozeman Symphony, San Francisco Symphony Youth Orchestra, Asociación de Profesores de la Orquesta Estable del Teatro Colón and the American Philharmonic of Sonoma County, with which he performed for two seasons.  Highlights of Armstrong’s 2010–11 season included concerto appearances with the Burbank Philharmonic Orchestra, American Youth Symphony and the Colburn Orchestra under the direction of Sir Neville Marriner.  He was recently co-concertmaster of the Colburn Orchestra as well as concertmaster of the American Youth Symphony.  A graduate of The Colburn School Conservatory of Music, where he studied with Robert Lipsett, Armstrong is currently in the Diploma program at the Curtis Institute of Music, where he studies with Arnold Steinhardt and Shmuel Ashkenasi.

Andrew Shulman’s career as cellist and conductor has taken him round the world.  As conductor, he has performed extensively in the United Kingdom, Germany, Ireland and Scandinavia. He is a regular guest conductor with the Britten-Pears Orchestra, the Ambache, Haydn and Brandon Hill chamber orchestras in London and Bristol, and the Salomon and Jönköping orchestras in the UK and Sweden.  He has conducted the world premieres of several major works, including the first performance of a previously unpublished work by Benjamin Britten with the Britten-Pears Orchestra. In the field of opera, he has conducted Mozart’s Le nozze di Figaro and Così fan tutte at the Theatre Royal in Bristol.  As soloist, Shulman has performed all of the major cello concertos with orchestras in Europe, the US and the Far East, including the Philharmonia Orchestra; the Academy of St. Martin in the Fields; the Los Angeles and Royal Liverpool philharmonics; and the City of Birmingham, Utah and Singapore symphonies.  He also directed the Academy of St. Martin in the Fields and the London Chamber Orchestra in concerto performances from the solo cello chair.  Shulman studied cello, composition and conducting at London’s Royal Academy and Royal College of Music.  He became a professor at the historic Royal College of Music in 1986, has given master classes around the world, and this year joined the faculty at USC.  He was bestowed with an Honorary RCM by HRH The Queen Mother and is the first British winner of the prestigious Piatigorsky Artist Award.  He has also recorded over 25 CDs with EMI as cellist of the Britten Quartet.  Formerly the principal cello of the Philharmonia Orchestra, the Academy of St. Martin in the Fields and the Los Angeles Philharmonic, Shulman joined the Los Angeles Chamber Orchestra as principal cello in 2008.

Los Angeles Chamber Orchestra (LACO), proclaimed “America’s finest chamber orchestra” by Public Radio International, has established itself among the world’s top musical ensembles.  Since 1997, LACO has performed under the baton of acclaimed conductor and pianist Jeffrey Kahane, hailed by critics as “visionary” and “a conductor of uncommon intellect, insight and musical integrity” with “undeniable charisma.”  Under Kahane’s leadership, the Orchestra maintains its status as a preeminent interpreter of historical masterworks and a champion of contemporary composers.  During its 43-year history, the Orchestra has made 30 recordings, toured Europe, South America and Japan, performed across North America, earning adulation from audiences and critics alike, and garnered seven ASCAP Awards for Adventurous Programming. Headquartered in downtown Los Angeles, LACO presents seven Orchestral Series concerts at both Glendale’s Alex Theatre and UCLA’s Royce Hall, five Baroque Conversations concerts at downtown Los Angeles’ Zipper Concert Hall, three Westside Connections chamber music concerts at The Broad Stage in Santa Monica, three Family Concerts at the Alex Theatre and an annual Discover concert at Pasadena’s Ambassador Auditorium.  In addition, LACO presents a Concert Gala, an annual Silent Film screening at Royce Hall and several fundraising salons each year.  LACO was founded in 1968.