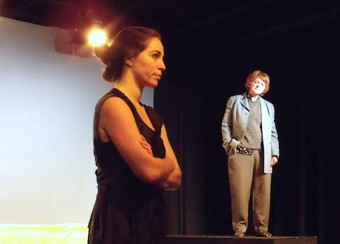 This week’s theatre review for the LA Weekly is for the hilarious romantic comedy Lights Off, Eyes Closed, a Sky Pilot Theatre production written by Liz Shannon Miller and currently playing at T.U. Studios in North Hollywood.

Click here and then scroll down about halfway to read my review.

Liz Shannon Miller’s romantic comedy gets off to a rocky start (unremarkable acting and staging) but soon finds its rhythm. The acting from the cast of six improves as the story begins to plumb emotional depths.

Jane (Joanna Kalafatis) finds herself bereft after her successful romance novelist mother (Mary Burkin) suddenly drives her Mercedes off a cliff. Intentionally or otherwise? Mom’s will bequeaths her fortune to charity, leaving only the outline of her last bodice-ripping novel for Jane to complete. “Lose yourself in the drama and adventure,” romantic Mom urges her more prosaic 24-year-old daughter. Problem is, Jane and dating have always been strangers…

Jane converses with the ghost of her mother all too easily, yet Miller has a lot of fun dramatizing the ridiculous scenes from the burgeoning novel. So do the two actors, Samantha Carro and Jason Kobielus, who alternate between playing Jane’s über-cute roommate Ali and hunky horn-dog Darian and the flamboyant leads in Jane’s novel.