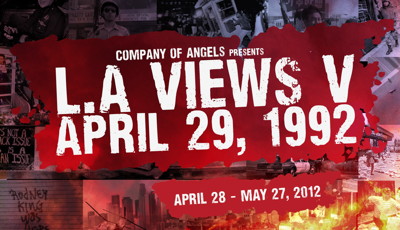 Each of these eight one-act plays are set in Los Angeles, 1992, during the civil unrest that followed the exoneration of four LAPD officers involved in the Rodney King beating. The unrest sparked widespread looting, assault and arson. In all, 53 people died, thousands more were injured and property damage topped $1 billion dollars.

Twenty years later, these plays dig through our City’s ashes and offer accounts of a time whose impact on Angelenos is still being assessed. From business owners to looters, newscasters to people trapped in the darkness of it all, a diversity of perspectives shed light on the legacy of 4/29/92. Launched in 2008, the L.A. Views series embraces a different City of Angels theme each year. Previous L.A. Views productions explored the concepts of hunger, gentrification and the wanting of community, as well as the famous former residents of Company of Angels Home at The Alexandria Hotel.

*Member of Actors’ Equity Association, The Union of Professional Actors and Stage Managers in the United States.

Discounts for Groups of 10 or more contact [email protected]

About the Production:
This production is made possible by in part by The James Irvine Foundation, Los Angeles County Arts Commission and the generous contributions of Company of Angels supporters and contributors.
Company of Angels would like to thank The Amerland Group, LLC, and Buxbaum Group for their patronage to CoA at The Alexandria.