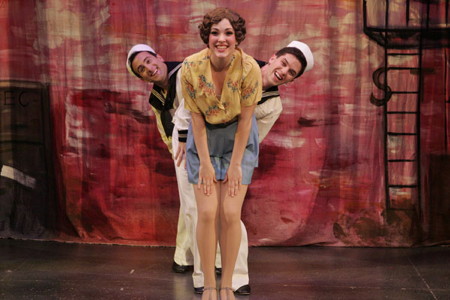 Theater review for LA Weekly – “Dames at Sea” at the Colony

Gentle readers, this week’s theater review for the LA Weekly is of the fun and frothy tap-musical parody Dames at Sea, currently running at the Colony Theater in Burbank.

Click here to go to the LA Weekly’s page with my review of Dames at Sea, and then scroll down a bit to find it.

Frothy nonsense involving a diva, an irascible stage director, a handful of plucky chorines and two handsome sailors, Dames at Sea is a peachy-keen tap musical. First staged in the late 60s, the sweet and mildly racy show sends-up the lavish 1930s Busby Berkeley-style movie musicals where an understudy steps into a lead role on Broadway gaining instant stardom. The inside joke is that the parody is achieved with a mere cast of six, a tiny stage and two pianos and percussion (performing off stage). You can only imagine the frantic quick changes going on backstage as the performers switch characters and costumes.

Fresh off the bus from Centerville, bright-eyed cutie-pie Ruby (Tessa Grady) falls in love, has her heart broken, regains love and debuts in a (hilariously relocated) Broadway musical, in a whirlwind 24 hours. Sixteen pretty songs include the forlorn “Raining in my Heart.” While the tapping could have been crisper, everyone is in fine voice.

Book and lyrics by George Haimsohn and Robin Miller, music by Jim Wise.