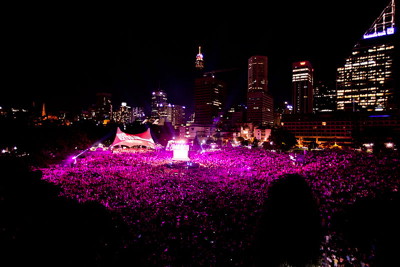 Twenty years ago, in Sydney Australia, a young actor-turned director named John Polson started a mini short film festival at his favorite coffee haunt; the Tropicana Café in the trendy inner city suburb of Darlinghurst. At the time, a handful of aspiring filmmakers handed him a VHS and these short and quirky films were then screened on a television in the café for about 200 people.

Within a few short years the festival, known as Tropfest, had amassed popularity and grown so large that audiences were spilling into the street. Videos were replaced by film submissions, and projected onto huge screens. Polson was savvy enough to get high-profile acting mates such as Russell Crowe and Nicole Kidman (and even Tom Cruise) to serve as judges on the annual festival, lending the event prestige and hype.  The massively popular annual event is now held in Sydney’s largest public venue, the Domain (adjacent to Sydney Harbor).

Now, to celebrate its twenty-year existence, Tropfest broadening its market. First stop this year is a Tropfest Vegas, a weekend-long short film festival at the glam hotel The Cosmopolitan of Las Vegas, June 2-4, 2012. There will be parties, concerts and events plus a presentation of sixteen of the best short films from the past twenty years.  Later in June Tropfest will be held for one night in New York. Festival dates for 2012 in Paris, London, Berlin, Toronto, India and Bangkok are in the works.

Tropfest and The Cosmopolitan of Las Vegas are collaborating to bring the world’s largest short film festival to the city of lights with the launch of Tropfest Las Vegas.

The weekend-long event which celebrates the 20th Birthday of the film festival will also feature live musical performances, film-themed birthday events and will culminate with a Tropfest “All-Star” competition featuring some of the best Tropfest films from the past twenty years.

Choosing from 16 finalist films, an industry and celebrity judging panel will select the overall winner from Tropfest’s storied history live in front of thousands of festival-goers.

Schedule of Events at The Cosmopolitan of Las Vegas:

General admittance to all Tropfest Las Vegas events is FREE but they strongly encourage you to reserve your space for the ‘All Star Competition’ here.

Exclusive packages and VIP tickets can be purchased online here.

Synopsis: What is the true call of the wild?

Synopsis: When a man thinks his day can’t get any worse, he discovers he is driving a bomb.

Synopsis: A dark and funny look at life, death and the secret to a long marriage.

Synopsis: Sometimes, disposing of a body can be a real pain in the ass.

Synopsis: A single father has a unique approach to raising his two year old twin boys- pick a favorite.

Synopsis: A story about love, about family, about fish fingers and a game called Yachtzee!

Synopsis: A father and his blind son struggle to survive on a drought stricken land.

Synopsis: Benny and Grandad are best friends and never leave each other’s side. They also run the most successful light refreshment stand in town. Yet all could change when an old neighbor decides to get in the way.

Synopsis: Lucky finds himself in a bind.

Mankind Is No Island directed by: Jason van Genderen

Synopsis: ‘Mankind Is No island’ is a film shot entirely on a cell phone, using found signage on the streets of New York and Sydney to tell a touching story from the very heart of two cities.

Synopsis: Learning is tough, especially when your tutor has something on his lip.

The Mistake directed by: Bryan Moses

Synopsis: The morning after a big night, a girl does everything she can to quietly escape the regrettable one-night stand asleep next to her.

The Story of Bubble Boy directed by: Sean Ascroft

Synopsis: In a stab-happy world, a sad outcast wrestles with his demons. The story of bubbleboy is a film about being trapped by the past and redeemed by the future.

The Switch directed by: Jonathan Emmerling

Synopsis: Uncle Jonny is the best mate of a 7-year old who is daydreaming during class.

Synopsis: A man and a dog vie for a woman’s attention. Can they come to a compromise? Not likely.