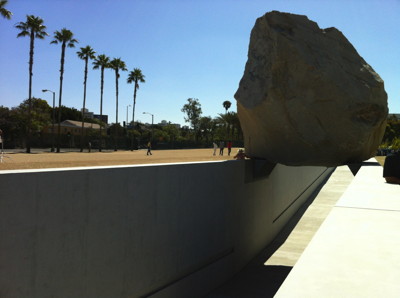 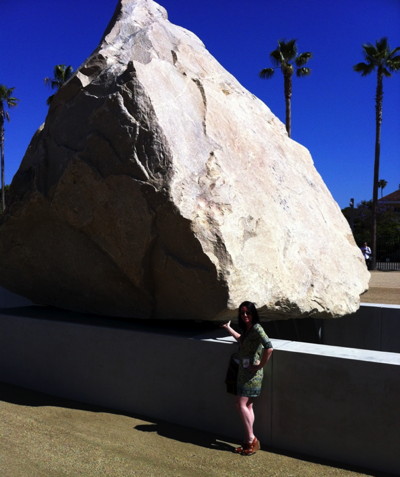 Artist Michael Heizer’s monumental sculpture Levitated Mass has opened at the Los Angeles County Museum of Art (LACMA). Unfortunately, the giant concrete trough built to afford an all access viewing of the rock, actually serves to dwarf the monolith. Still, the public can now visit and pass underneath this unusual artwork.

Originally conceived by the artist in 1969, Levitated Mass is a 456-foot-long concrete slot, over which sits a 340-ton granite boulder. As visitors walk through the slot, the pathway descends to fifteen feet in depth, running underneath the boulder before ascending back to ground level.

“This is a historic occasion, one many years in the making,” said LACMA CEO and Wallis Annenberg Director Michael Govan. “Thousands of families witnessed the transport of the 340-ton megalith to LACMA this spring, and now Michael Heizer has realized his artwork on the museum’s campus, where it will stand for generations to come. I am grateful to the many generous donors who made this incredible endeavor possible.”

“Nancy Daly was a passionate advocate for the arts and for children in Los Angeles,” said Terry Semel, co-chair of LACMA’s board of trustees. “Levitated Mass is a fitting tribute to her leadership and to her philanthropic vision. I know that so many people — children especially — will find inspiration and wonder in this monumental work of art.”

Transport of the boulder from a quarry in Jurupa Valley to LACMA — one of the largest megalithic stones to be moved since ancient times — made international headlines in March of this year. The 11-night journey through five counties and twenty-two cities drew thousands of enthusiastic onlookers day and night from all over Southern California. Transport was made possible by Hanjin Shipping Co., Ltd.

As a show of thanks to the many communities which saw and hosted this historic transport, the museum is offering a free admission to residents of select zip codes during the week of June 24 to July 1, 2012.

Visitors simply need to show proof of residence in one of these zip codes to the ticket office to gain free admission.

The full list of zip codes is available here.

Open to the public Summer 2012

It is situated north of the Lynda and Stewart Resnick Exhibition Pavilion, near the museum’s 6th Street entrance.

Michael Heizer was born in Berkeley, California, in 1944. He briefly attended the San Francisco Art Institute and moved to New York City in 1966, where he produced large-scale paintings.

In late 1968-69, Heizer chose to operate between his studios in New York and a ranch he eventually built in Nevada. Here, he began to produce large-scale sculptures such as Nine Nevada Depressions and Displaced/Replaced Mass, as well as large earth drawings and paintings on dry lakes in California and Nevada.

To interpret these immense sculptures in a gallery setting, Heizer developed his unique use of large-scale still photography in the form of collages and static projections. Several shows with oversize rock-in-floor depressions were produced in Los Angeles and New York with Ace Gallery. His 1969 artwork Double Negative (now owned by the Museum of Contemporary Art, Los Angeles) inspired generations of artists.

Heizer is currently completing his largest project, City, begun in 1972. Permanent installations of Heizer’s sculpture can be found throughout the United States, including Seattle, Washington; Oakland, California; the Menil 2 Collection and Rice University in Houston, Texas; the MIT campus in Boston, Massachusetts and the corner of 56th and Madison Avenue in New York City. Major exhibitions of his work have been presented at the Whitney Museum of American Art, New York; Museum of Contemporary Art, Los Angeles; Foundazione Prada, Milan, Italy, and at the Rijksmuseum Kröller-Müller, Otterlo, Holland.