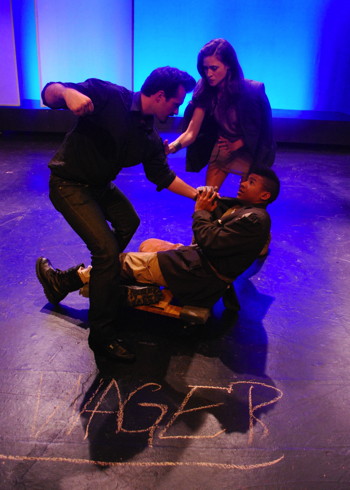 Here’s a new piece I wrote for the LA Weekly about a couple of plays that deal with a homeless theme.

Click here to go to the LA Weekly site.

Earlier this month the L.A. Weekly broke a troubling story that starkly illustrates the growing chasm between the ‘haves’ and the ‘have nots’ in today’s society. The article brought to light the callous actions of Ronnie Teasdale, owner of L.A.’s Crossfit Mean Streets gym, who plastered his gym’s Facebook page with supposedly “hilarious” photos that demeaned several unfortunates of the homeless community from the neighboring Skid Row district.

In the photos, Teasdale and a handful of bare-chested CrossFit gym fanatics gleefully strike macho poses while hovering over man who has passed out in the gutter. Other photos, teamed with mocking captions, show unconscious men with gym tee shirts draped over them. Apparently it takes a real he-man to humiliate the less fortunate.

Meanwhile, across town at Open Fist Theatre in Hollywood, director Amanda Weier tackles our perception of the homeless in a different but equally confrontational fashion with Short Ends, an evening of short plays by controversial playwright Neil LaBute. An effusive and friendly young man, seemingly crippled and kneeling on a small trolley, is stationed outside the theater doors on Santa Monica Boulevard prior the show, begging theater patrons for spare change. He even propels himself into the lobby and then onto the stage. It’s only when he whips out a piece of chalk and starts writing the title of the first of the five short plays onto the stage floor that it becomes apparent that this transient fellow is a character in the show.

The actor, Shermel Carthan, features in “The Wager,” a ten-minute play in which a hostile guy deliberately baits and bullies a homeless beggar to the dismay of his female companion. From the moment the antagonist (simply called “the Guy”) becomes vicious, this potent and disturbing piece is instantly recognizable as a work by LaBute, thanks to its edgy humor and a couple of surprising twists.

The Guy’s aggressive use of mental and physical power trips disconcertingly builds to an unexpected revelation, challenging our attitudes towards those in the underbelly of society. Much like the deplorable behavior exhibited by the CrossFit gym members, the play asks to what extent can the “disposable” people in society be used for the amusement of others.

Across the country, a group of homeless people from Calgary, Canada have headed to New York to perform in an off-Broadway production that they helped to create. Presented as part of this year’s New York Musical Theatre Festival, the piece, Requiem For A Lost Girl: A Chamber Musical About Homelessness, was devised by Onalea Gilbertson in collaboration with a chorus of men, women and children who know the experience of destitution first hand.

By exploring themes of poverty, mental illness and addiction, the original chamber musical serves as a memorial service for a missing young woman. The show, co-produced by LA’s Rogue Machine Theatre member Andrew Block, seeks to erase the line between “us” and “them” by presenting a raw and moving blend of true stories from those who live rough, granting a voice to those on the streets of North America.

Anyone suffering from compassion fatigue on either coast has the opportunity to regain a little perspective and some empathy from these two thought-provoking shows.