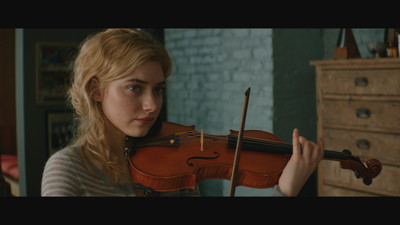 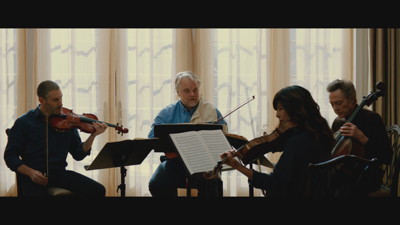 Philip Seymour Hoffman delivers yet another consummate performance in A Late Quartet, a flawed film by first time feature director, Yaron Zilberman. Hoffman and Imogen Poots, riveting at times as his free-spirited daughter, help salvage this ambitious but cumbersome effort.

Zilberman’s screenplay, co-written with Seth Grossman, builds around the personal lives of the members of a string quartet, and aims to construct parallels between the intricacies of chamber music and the complex emotional lives of its characters.  From the get-go it’s an uphill undertaking: The intellectuality of the arena – classical music – and the urbaneness of the characters set us up for a story more suited to the stage than the cinema.  The writers also indulge in so many coincidences and contrivances that pretty soon it’s hard to keep faith in the story.

Hoffman plays Robert, second violinist in a celebrated string quartet whose other members include his wife Juliette (Catherine Keener) and colleagues Daniel (Mark Ivanir) and Peter (Christopher Walken).  Together for decades, the quartet’s future is suddenly thrown in doubt when Peter is diagnosed with Parkinson’s and announces he soon will retire. 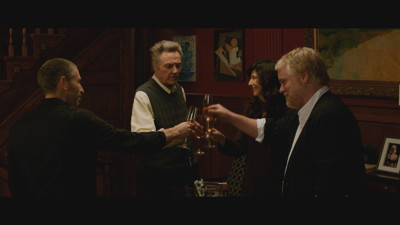 His decision generates chaos, arising not just from concern for Peter’s health – he’d been teacher and mentor to the others in their college days – but from a grave splintering of purpose among them. It turns out Robert has long been dissatisfied with his role as second violinist, and wants to alternate with Daniel in playing first, since this is, traditionally anyway, the more visible and creative role.  But Daniel resists, recruiting Juliette to help him persuade Robert to accept the status quo.  She does this willingly, cutting Robert to the quick with her reservations about his suitability, and triggering hurt feelings on both sides that ultimately jeopardize their marriage.

In the meantime, Robert and Juliette’s daughter Alexandra (Poots), a promising talent, has begun taking lessons with Daniel, a virtuoso player whose strength is his cool mastery of technique rather than the passion he invests in his music.  Daniel is a strict taskmaster, and a reserved man who provokes in the strong forthright Alexandra both resentment and curiosity.  The latter prevails, and one afternoon she seduces him, initiating a May–December liaison that develops into a serious and committed relationship.  At least Alexandra thinks so.  ‘We’re in love,” she tells her parents, who are outraged – Robert knocks Daniel to the floor – and skeptical.

As are we.  Intended as a profound character-driven narrative embodying the depth and complexity of a work by Beethoven, the film is filled with false notes and dissonant passages. While Hoffman stirs depth and Poots is intense and charismatic, Ivanir’s Daniel can be summed up as a series of dull choices; there are no layers or surprises beneath his stiff cipher-like exterior, making you question what the smart forthright Alexandra would see in him.  Keener also plays it pretty much by the numbers; Juliette fits snugly into the pattern of snide spoiled neurotic women she’s portrayed so often in the past. Still, the portrait of Juliette and Robert’s marriage, one in which he’s far more committed than she, is perhaps the plot’s most nuanced element.  Wounded by her betrayal in his conflict with Daniel, Robert solaces himself with a one night stand with a long-time friend; he resolves in the morning to end the fling right away, and is devastated when Juliette throws him out and, bitterly unforgiving, moves to end the marriage.  While her intractability comes off as unbelievably harsh (one of the contrivances I referred to earlier on), Hoffman’s portrayal of Robert’s distress is the artistic highlight of the film.  As for Walken, he’s ever the craftsman, although Peter’s lone struggles with his disease are ultimately overshadowed by the film’s showier plot threads.

One of the film’s pluses is Frederick Elmes’ cinematography: beautiful exteriors of a snowy Manhattan and, in tandem with production designer John Karsarda, superbly tasteful interiors.  At a time when mature films for grown-ups seem more and more like an endangered species, Zilberman gets points for trying.

Now playing at the Landmark cinemas in West L.A.