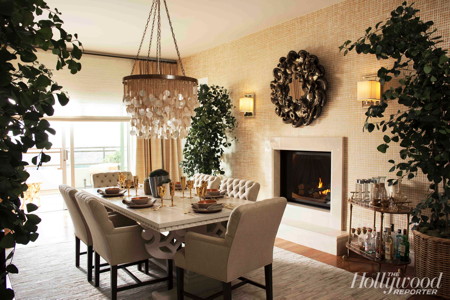 THR Design Hollywood at ‘The Century’

A stylish and custom showhouse, featuring décor by preeminent designers, in two grand and luxurious residences at the glamorous complex, The Century, is now open to the public for viewing.

The showhouse will be open on weekends until Sunday, November 18, 2012. Admission is $40.00 and all ticket sales will benefit the Wallis Annenberg Center for the Performing Arts.  For more info and to purchase tickets, go here.

This chi chi designer showcase – THR Design Hollywood at The Century – is presented by The Hollywood Reporter (THR) and Related Companies, the nation’s most prominent real estate firm.  The showhouse coincides with the publication of THR’s first-ever Home Issue and “Top Interior Designers in Hollywood” list.

THR Design Hollywood at The Century features the work of leading interior designers and architects including:

Drink in the splendid views from the gorgeously appointed apartments, situated on the lofty 20th floor of the 42-story swanky residential skyscraper. Each large residence has its own private elevator vestibule and breathtaking panoramic views that stretch from downtown Los Angeles, across the Hollywood Hills to the Pacific Ocean.

Several designers explained their artistic process for the project. The directive given was that each room in the residence should help the visitor imagine they are stepping into the private space of a quintessential Hollywood icon such as an ingénue, screenwriter, high-powered director or A-list actor.

The first thing you encounter, when you step out of the elevator that takes you to the private entrance of the first residence, is that spectacular and far-ranging view. Then you might notice you are standing on geometric, herringbone-patterned ‘zebra’-striped marble from Turkey in the elevator lobby. Inspired by Gio Ponti (an Italian architect and designer from the 30s—60s), John Boyland has designed the ceiling and floor of this small space, with a blend of classic, retro touches and a “dramatic, sexy and fresh” style.

The designer of one of the master bedrooms is Joan Behnke. Representative Grace Shin explained the style, saying, “Things that we like include Europe, Paris, Italy, Japan, Abu Dhabi. We wanted to capture the Southern California spirit with the sense of a world traveler.” Indeed the calm colors combined with a casual look lend an air of sophistication. Of note is the cashmere fabric covered headboard, lending a modern aesthetic with natural and tactile materials. Custom made items include the banquette and the oak nightstands. Two hanging sculptural pieces are comprised of numerous cones made from raw washi paper and string. Apparently the office staff was entrusted with that craft project!

The glam dining room is designed by Tim Clarke. Central to the room is the capiz shell chandelier that doubles as a soft wind chime. Because it – like most rooms – takes in the vast view, Clarke says he strove to borrow from the landscape view to bring the outside indoors. Hence, there are two large ficus triangularis in place, flanking the dining table, handsome sideboard and book shelves. A textured and unusual wallpaper of caba barkskin, pounded and woven, with metallic paint beneath, completes the room. As Clarke opines, “Rooms can often get overfilled. Leaving space for people is important.”

Apparently Jane Hallworth didn’t get that memo! Her room, a modern study, is dominated by a massive (8-foot in diameter) dark burgundy brown central hanging made from twisted Velcro. Designed by Rachel O’Neill the hanging is “almost like a cloud of thought,” insists the designer. Hallworth tells me she invented a fictitious story for her room’s fictitious inhabitant. “I pictured a modern ‘Beau Brummel’ [a regency dandy from the 1750s] who has the most outlandish style, mixed with an educated aesthetic. Perhaps James Franco – at least, a renaissance man,” she adds. The home-made audio equipment, including a turntable and amplifier suggest an old-school ‘Lady Gaga.’ Luxurious dark-hued, floor to ceiling velvet curtains lend an air of mystery and helped mitigate the challenging shape of the curved exterior wall.

Cliff Fong did a fantastic job with the service area and passageway that runs between the two luxury apartments. Usually starkly lit by bright and icy cold fluorescent lighting, Fong says he “wanted to get away from the obligatory and reinvent the passage with some history. To achieve this he added aged and finished moldings and baseboards as well as installing moodier and more subtle lighting. There are several fine art pieces installed as well, that are decorative but with substance.

The rest of the rooms are equally pleasing.  See them for yourself!

THR Design Hollywood at The Century

Open to the public:

All ticket sales will benefit the Wallis Annenberg Center for the Performing Arts, a new performing arts center in the historic Beverly Hills Post Office.

***Complimentary parking will be available at The Century.***

For additional information and to purchase tickets, visit the official website here.