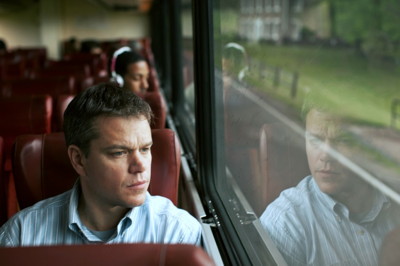 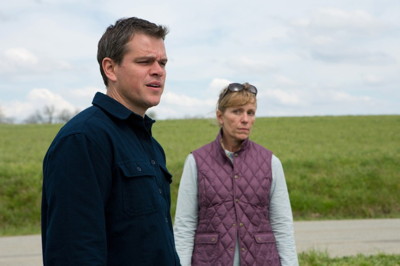 Timely Film Keeps Some but not All of its Promise

Promised Land isn’t a great film but it is a good one, with a timely narrative that deals in the immediate sense with the pros and cons of fracking and, in a broader sense, with the price paid for the American dream. Favored with strong performances, good-looking cinematography and a meaningful message, it’s a film you relish for its pluses, while at the same time wishing the filmmakers – screenwriters Matt Damon and John Krasinski  and director Gus Van Sant  – had had the courage to take their story to a more logical, less contrived conclusion.

Damon stars as Steve Butler, an up-and-coming employee of Global Crosspower Solutions, a corporate behemoth in the business of developing natural gas. Steve is the son of a farmer who grew up in a rural community that fell apart after a local company closed its doors forever. In his own eyes and those of the company, Steve’s bucolic background makes him the ideal agent to approach distressed farmers to secure their approval to drill under their land. For him it’s a simple matter: The company’s going to pay these people money that will make their lives easier and better. The ramifications of what he’s pitching – the environmental damage that fracking might do – seem not even to have occurred to Steve. Accompanied by a veteran colleague, Sue (Frances McDormand) he shoulders his assignment with enthusiasm and confidence.

But that confidence begins to waver when his campaign is challenged, first by the local high school science teacher (Hal Holbrook) who’s dug up anti-fracking info on the internet, and later by a savvy environmental agitator named Dustin Noble (Krasinski), a charismatic guy whose graphic photos and  demonstrations before elementary school students persuade a large segment of the community, including Steve’s love interest, portrayed by Rosemary DeWitt, that accepting the company’s money might not be such a good thing after all. The film plays out as a tug of war for the hearts and minds of these farm folks, pitting Steve, a rep for a corporate Goliath, against Dustin, an independent activist and a resourceful guy whose politics progressives in the audience may support but whose glossy smile and “gotcha” manner make him seem somehow less than trustworthy.

Not that Damon’s Steve comes off as the most principled guy. He’s caught out more than once lying to the locals about the value of the land, since his chief purpose is a self-serving one – to please his bosses and further his career. But he’s not Gordon Gekko and he’s not a scion of privilege; he’s a farm boy born into an American tradition of struggle and hard work, who’s doing his best to leave that behind and live out a Horatio Alger dream. It’s that aim – what he’s willing to do to get ahead – that transforms the film from a story about a local battle in a small community to a weighing in on the morality of self interest in American society.

The role is right up the alley for Damon, who’s been successfully depicting reined-in guys who eventually uncoil since The Talented Mr. Ripley.  Here, his multifaceted performance pulls the film together and helps us overlook the potholes and awkward setups in the well-meaning plot. One awkwardness that comes immediately to mind has to do with why Steve is so unprepared when confronted with arguments about polluted water and the suspected carcinogenic dangers of drilling, as if objections to the practice were new and obscure to the public, rather than front and center in a raging national controversy. With so much at stake, you’d think a business professional would have come fully prepped, with ready answers and reassuring info – and that the home office would have his back with something other than a checkbook. Instead, notwithstanding a few phones calls – which we don’t hear, only hear about – he and Sue appear to be winging it, improvising as problems arise. They’re even driving around in a junky car that sometimes starts and sometimes doesn’t – initially part of a gambit, maybe, to appear just “plain folk,” to the locals.  After a while, though, the balky car comes to symbolize their frustration, evolving into an ironic device and a source of humor – Sue has more of a knack at starting it than Steve – that wears thin. The most glaring contrivance is a twist towards the end that radically recalibrates the narrative and is both easy to predict and hard to buy. In other words, this is a Hollywood movie, not real life.

But if it is Hollywood, it’s Hollywood with an intelligent purpose. Van Sant garners solid performances down the line, although there are a couple of missteps – most notably McDormand who, with her vulnerable aura, seems miscast as an operative with a harder edge than Steve.  Taken as a whole, though, this portrait of the dying subculture we know as rural America is rendered artfully and with respect, with a message about community and civil discourse that, even if it is a bit pat, bears listening to.