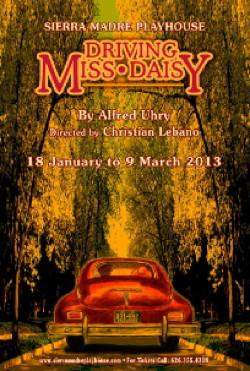 On Sunday, February 10, 2013, during Black History Month, the Sunday matinee performance of “Driving Miss Daisy” will be followed by a talk and Q & A with former Los Angeles City Council member Robert Farrell. A Mississippi native and Freedom Rider during the Civil Rights Era, he will reflect on that important period in our history. Following his appearance, vocalist and recording artist Maiya Sykes will perform some of the anthems of the Civil Rights Era.

“Driving Miss Daisy” is the Pulitzer-winning play by Alfred Uhry about the developing friendship between an elderly Jewish woman in Atlanta and her African American chauffeur. Set in the years 1948 through 1973, the issues of civil rights and race are always part of the story’s background.

2:30 p.m. matinee performance will be followed by speaker former Councilman and Freedom Rider Robert Farrell and a performance by vocalist Maiya Sykes.