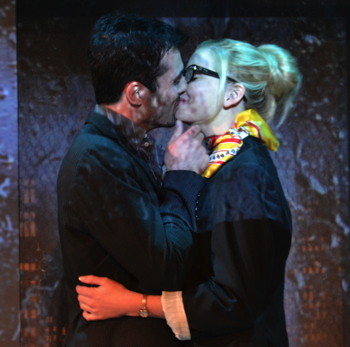 Stephen Sondheim composed the lyrics and score to his innovative “concept musical” in 1970, with book by George Furth. For a comedy musical about love, it proves resolutely unromantic and honest. And, surprisingly, its acerbic wit and laserlike scrutiny of marriage, dating and relationships does not feel at all dated.

Director Albert Marr’s incorporation of cellphones and Facebook effortlessly adds a contemporary feel. The loose story centers on Robert (a charismatic Ben Rovner), a handsome, single, mid-30s New Yorker surrounded by well-meaning but smug married friends. Their cheerful efforts to push him toward joining their club are undermined by their conjugal lives, which are fundamentally flawed or dysfunctional.