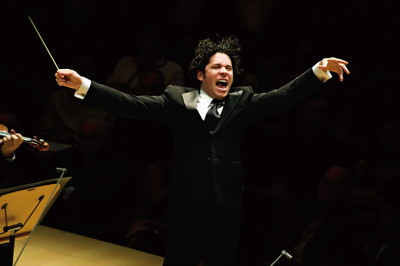 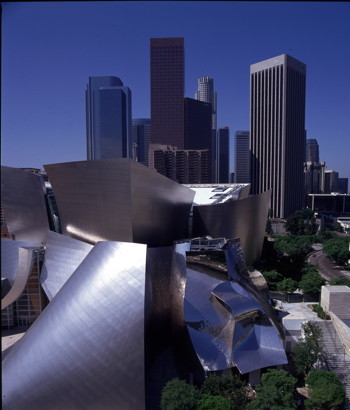 At a recent luncheon, held at the Walt Disney Concert Hall on February 25th, Gustavo Dudamel announced the upcoming 2013—14 season for the L.A. Philharmonic (L.A. Phil). Numerous exciting concerts and events are scheduled over the next year, commencing with the Opening Night Concert and Gala event on Monday, September 30th. It’s the orchestra’s 95th season and Dudamel’s fifth season as Music Director.

The 2013—14 season, entitled Inside Out, has an eye on the future as well as the past. The upcoming concert series features modern as well as classical music, opera and jazz, and is designed to celebrate the 10th Anniversary of the gorgeous Walt Disney Concert Hall.

Guests at the luncheon included journalists from around the world and this diversity was to be expected; the L.A. Phil has become a leading world-class orchestra.

Architect Frank Gehry is the visionary who created the Walt Disney Concert Hall, which opened on October 24, 2003. An informal and relaxed filmed interview with Gehry showed him describing how the magnificent concert hall came to be. The outcome of this project, which now sponsors a myriad of programs, is a long way from the Dorothy Candler Pavilion across the street, built for the L.A. Phil, where they staged their first concert in 1964 with Zubin Mehta conducting.

Dudamel, deceptively boyish at 32, enthusiastically shared his hopes for the upcoming celebratory year.  Inside Out, he explained to us, is a diverse season of music that has been devised “to further the creation of the fabric of community.”  Indeed, Dudamel has been highly successful in creating and fulfilling this vision.  The conductor and Musical Director has promoted programs that include the “values of community access” and have been created to “make the Disney Concert Hall a living room for the city.”  These includes his free community concerts performed throughout the city and a special project that is close to his heart, the Youth Orchestra of Los Angeles (YOLA).

Dudamel lovingly spoke of YOLA as “des sueños de los niños” – “the dream of the children.” Dudamel’s homeland, Venezuela, inspired the revolutionary music program, El Sistema. Now, through his efforts, the L.A. Phil and its community partners provide free instruments, intensive music training, and academic support to students from underserved neighborhoods, enabling every child to contribute discovering his full potential. Smiling enthusiastically, Dudamel told us his goal with this program is “the development of the artistic level of the ‘artist’.”

Performances throughout this season include the Opening Night Gala with Yo-Yo Ma; a unique installation by video artist and director Netia Jones; thirteen world premieres including Frank Zappa’s 200 Motels; special events and other commemorations.

This upcoming 2013—2014 for the L.A. Phil season, lead by Dudamel, continues to secure the L.A. Phil’s place as one of the most comprehensive and musically generous orchestra’s in the world of music.

10th Anniversary Celebration of Walt Disney Concert Hall – Inside Out.
Season Highlights include:

The West Coast premiere of Andriessen’s De Materie and a performance of Glass’ the CIVIL wars, the Rome Section.

Simón Bolívar Symphony Orchestra of Venezuela residency in partnership with the LA Phil, present a survey of Tchaikovsky’s orchestral works under Gustavo Dudamel, concluding in a performance combining both orchestras.

TchaikovskyFest includes a wide spectrum of additional events, including the TAKE A STAND symposium.