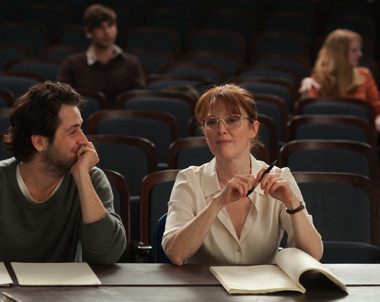 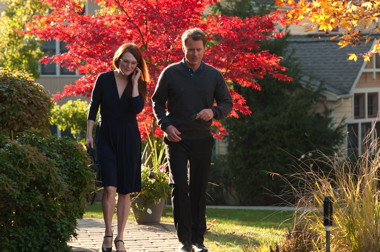 Comedies for adults come along so rarely these days, it’s a pleasure to have one to praise.

Directed by Craig Zisk from a smart, perceptive script by Stacy and Dan Chariton, The English Teacher is set in a small town in Pennsylvania and builds around the trials and tribulations of an unmarried schoolteacher, played by Julianne Moore. While the first ten or fifteen minutes portend a story about a lonely woman searching for love, it’s soon clear that’s not what this film is primarily about. Relayed from the standpoint of a bright and caring person, it’s about values – not the ersatz God and country and chastity-before-marriage nonsense, but real ones: passion for one’s work, commitment and dignity, and making one’s actions stand for something without requiring the applause of the world. It’s a paean, if a somewhat backhanded one, to the dedicated teacher—someone not only traditionally under-unappreciated in American society [“Those who can, do; those who can’t, teach”], but lately demonized by corporate capitalists and others who fear any shepherding of thought that creates an open mind.

But enough of this progressive rant…

The English Teacher features the lovely and infallibly talented Julianne Moore as Linda Sinclair, a childhood bookworm who grows up to find her niche as a high school English instructor. Terrific at her job, Linda is respected by both students and her peers. In her mid-forties, she’s still a knockout. But though she’s looking, she’s yet to meet the right man, and spends most evenings home with her cats.

This orderly if lonely life changes after she runs into 20-something Jason (Michael Angarano), a former student and aspiring playwright who’s returned home from New York City, discouraged by his failure to have his plays produced. A lover of literature, Linda volunteers to read Jason’s latest work, and she’s bowled over. Set on helping him, she allies with the school drama coach, Carl (Nathan Lane) to lobby the school’s administrators – its flaky but well-meaning principal, (Jessica Hecht), and its bulldog V.P. (Nobert Leo Butz ) – for permission to mount a school production. Carl and Linda convince their more conventional colleagues to replace a forthcoming production of Our Town with Jason’s angst-driven drama by having Carl agree to significant changes in the script and by having Linda, rashly, promise to pay for any cost overruns in the ambitious project. 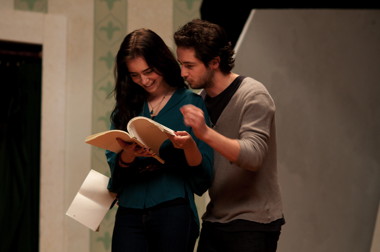 For a while the film proceeds as an amiable comedy, drawing mileage from its assortment of well-conceived characters – Lane’s over the top drama queen in particular – and from the sort of comic hysteria that accompanies an amateur production.  Involved as producer, Linda’s problems at first are limited to writing increasingly large checks, and to concealing from Jason Carl’s promise to the school honchos to doctor his script. Then, something happens: at a stressful juncture in the rehearsal, Linda and Jason exit to conference in Linda’s classroom, speaking heatedly until, in a spontaneous unguarded moment, they fall into each other’s arms, and copulate across her desk. It’s a game-changer. Linda’s safe and sensible life falls apart, and the comedy turns dark.

The rest of the film tracks Linda’s efforts to dig her way out of an emotional pit and re-establish herself in a place of normalcy and self-respect. This being a Hollywood film, plot details are at variance with how things might go down in the real world. And the inclusion of a narrator (Fiona Shaw) with a literary inflection adds an unnecessary affectation to the story. But if the particulars are sometimes fanciful, the characters are not; they’ve been created, and are portrayed, with sensitivity and humor, not only the principle ones but the secondary and the minor players, including Greg Kinnear as Jason’s buttoned-up Dad, Lily Collins as a budding young beauty who also catches Jason’s eye, and Charles Saxton as the goofy kid whose actions wreak havoc on Linda’s life. It’s nice to see a well-observed portrayal of ordinary folk who are at once foolish and heroic, the way the best of us usually are.

The English Teacher is now playing at the Laemmle Playhouse 7, and the Sundance Sunset Cinema.