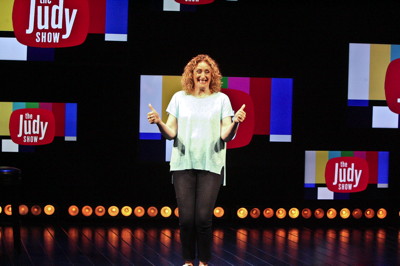 Hello readers! This week’s theater review for the LA Weekly is of The Judy Show, now playing at The Geffen Playhouse in Westwood.

Obsessed by the fantasy families of TV shows she devotedly watched while growing up, “6-foot-2, observant Jew and lesbian mom of two” Judy Gold apparently has spent most of her adult life pitching uninterested network executives a sitcom about her unremarkable life. Instead, we have a play called The Judy Show that has nominally been transferred to the stage from a stand-up comedy club. That is to say, the 85-minute show remains an extended stand-up piece.

There’s an added scenic element of seven television screens of varying size positioned upstage displaying everything from baby photos and brief home movies to images from the iconic TV family sitcoms to which Gold makes frequent reference, plus an upright piano on which she occasionally bashes out a show’s theme. She traces her experiences at Jewish summer camp, high school, Rutgers and, later, her career as a stand-up comedian and her family life. Regrettably, the jokes fall flat and Gold’s story doesn’t bear sharing.