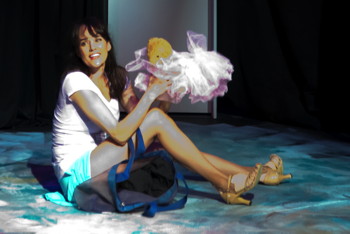 Hello readers! This week’s theater review for the LA Weekly is of Suburban Showgirl, now playing at NoHo Arts Center in North Hollywood.

A mostly autobiographical story conceived and performed by perky pro-dancer and actress Palmer Davis, the travails of this invented character ‘Wendy Walker’ apparently hew closely to her own life experiences.

A one-person show from a dancer’s perspective, Suburban Showgirl presents the trials and tribulations of a woman passionate about ballet since she was small but whose leggy stature eventually steered her into glittering, plumed costumes and onto the stages of Broadway.

Marriage, and her first of two babies, doesn’t quite derail a white-hot career; rather it gets shunted to the suburbs and the less demanding tasks of teaching dance while serving as a magician’s assistant.

Bringing in the bread while juggling mommy duties of two toddlers (ages unspecified) she stops short of dissing her unreliable, alcoholic husband, even claiming, unconvincingly, “He’s a great father!” Rather she lets his negligent behavior speak for itself.

The first third (of the 80 minutes) feels slow, but eventually Davis wins you over with her playfulness and superb dancing prowess, often relying on mime, song, costume changes and adeptly adopting numerous personae.

Suburban Showgirl: A one-woman drama written and starring Palmer Davis whose main character must balance her life between being a professional dancer, wife and mother.