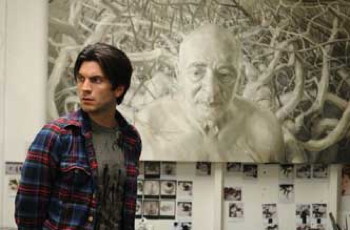 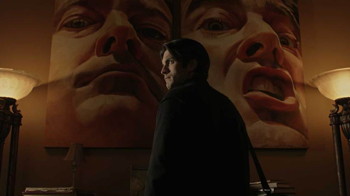 The Time Being (2012) is a visually arresting film, an ambitious effort undercut by a problem script and a forgettable performance by lead actor Wes Bentley.

Bentley plays Daniel, a young painter with a wife (Ahna O’Reilly) and child (Jeremy Allen White) whom he loves dearly. Needing money, he accepts a series of unusual photographic assignments from a rich recluse named Warner (Frank Langella), who treats his new employee with obscene rudeness and goes out of his way to make him feel small and inadequate. When Daniel protests he’s met with withering stares and mean-spirited insinuations about his inability to care for his family. Eventually Daniel’s marriage does fall apart; his relationship with Warner, however, continues, transforming after it becomes clear that the elder man is ill and that the demands he’s made on Daniel spring from guilt involving his own checkered past.

All of which sounds interesting enough on the surface. The problem is not in the concept – beleaguered hero is confronted by a mysterious powerful man with a hint of the demonic, nothing wrong with that – but in the carry-through. Given these tough times when so many folks are under the gun – losing their job, their health insurance, their home, Daniel’s problems seem commonplace – too commonplace to rate the allegorical grandeur hinted at by composer Jan A. P. Kaczmarek spooking score, or the meaningful shots director Nenad Cicin-Sain has of him brooding over his problems in his shabby Venice (L.A.’s Venice) bungalow. As to the inference  (created by the music in tandem with cinematographer Mihai Malaimare’s bleak but affecting panoramas) that Daniel’s integrity is somehow at risk, this scenario never materializes. It turns out Warner is not a surrogate for Mephistopheles but just a self-despising old man. 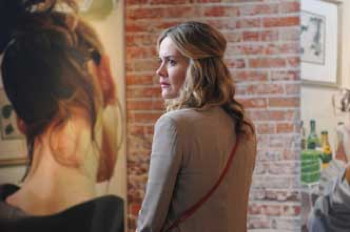 Apart from setting us up for a Faustian crisis that never plays out, there’s an awkward subplot surrounding Daniel’s marriage: One minute he and his wife are lovey-dovey – then presto, she’s complaining he doesn’t confide in her and is off to live with her mom, taking Daniel’s adored son with her. It’s all too fast and too clumsily convenient, evincing a flawed strategy from first-time screenwriters Cicin-Sain and Richard N. Gladstein: Let’s create problems for our hero, we’ll worry later about the logic.

It doesn’t help that Bentley the performer seems lost most of the time, uncomfortable in the role at best and almost like a deer in the headlights at crucial moments when his character’s anxiety seems to seep into his own. Fortunately, while Daniel comes off as stiff and inexpressive, the ever-excellent Langella is compelling, drawing us in despite his character’s off-putting misanthropy and the pretentious narrative he’s caught up in. Sarah Paulson plays a museum guide and single mom, a secondary figure ’till near the end when she assumes center stage and, in a moving outburst, stirs our empathy as Bentley’s Daniel fails to do throughout.

The Time Being – directed by Nenad Cicin-Sain.