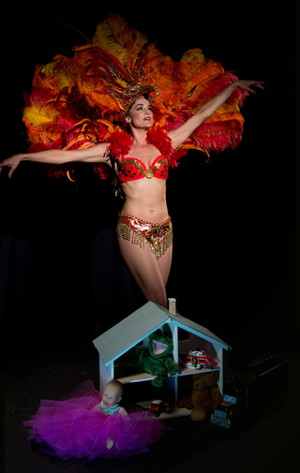 In her smart and funny show Suburban Showgirl, solo performer Palmer Davis portrays alter ego Wendy Walker, a talented dancer who struggles to juggle a passion for her art with motherhood and the bread-and-butter jobs she needs to pay her bills.  Drawing on her real-life experience, Davis delivers an entertaining and accomplished performance, one to be relished not just for the terrific dancing – ballet, tap, can-can, you name it, the versatile Davis can do it – but for the humor and insight her story relays about all of us who are complicated contradictory human beings.

Davis frames her narrative from backstage in a Las Vegas dressing room. A harried mother of two, Wendy is scurrying to dress for her latest gig as a magician’s assistant when she’s accidentally locked in a closet. Manically fumbling with the door handle while calling desperately for help, she recalls the events that have led up to this ludicrous moment. Her recollections begin with her childhood introduction to ballet at her mother’s insistence, then shift, not always chronologically, into adulthood, where she is lobbied, like a ping pong ball, between an erratic showbiz career and her life as a teacher of dance and a suburban mom.

Accompanied by pianist Ross Kalling – whose lively instrumental adds comedic nuance – and abetted by imaginative costume changes, Davis depicts multiple characters, including her rhythm-challenged daughter, her gruff-spoken theatrical agent, and assorted inner city teens, whom she must persuade about the value of dance.

As staged by director/choreographer Keith Young, some of the transitions could be crisper, and the production would be better served by a more colorful set to replace the black curtain and essentially bare stage on which she performs now. But that’s nit-picky stuff when juxtaposed against this performer’s gifted storytelling, exuberant physicality and upbeat message.

Review by by Deborah Klugman.

The New York City institution, The Metropolitan Opera, is now offering streaming of titles from its Live in HD series each night through the duration of the closure. The performances, originally captured as live...