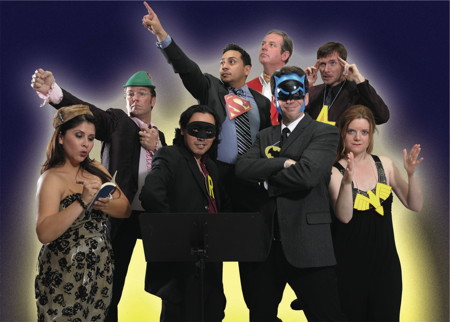 Celebrate the antics of the defenders of truth and justice in a variety show inspired by nuggets of pop culture straight from the height of the Silver Age. Revel to live, multi-media performances of vintage comic book stories including “Supergirl Goes to College” and the infamous “Joker’s Comedy of Errors,” in which the ‘super’ word “boner” is used about 97 times…

In between, enjoy variety bits, live music, singing, art and a special surprise – the Celebrity Roast of Superman! This will be a super-fun roast, in the tradition of Dean Martin’s notorious gatherings.

Captured Aural Phantasy Theater (CAPT) is pround to celebrate its 5th year performing in Los Angeles with a return to the historic El Cid for another season of monthly shows! The Superhero Variety Hour, is the latest from this league of theater geeks, who blend comic books, pop culture and the absurd in its signature variety show format. We thrilled audiences at Comic-Con 2013 and the first annual Scare LA convention this summer. Now, we are looking ahead to an exciting new season of shows!

Shows start at 8:30pm, but doors open at 7:30pm so audiences can revel in El Cid’s 100 year-plus history while enjoying a brand new tapas menu and superb cocktails. Get there early to grab a good seat and enjoy some excellent food, or get a perfect seat near the curtain and just start drinking!