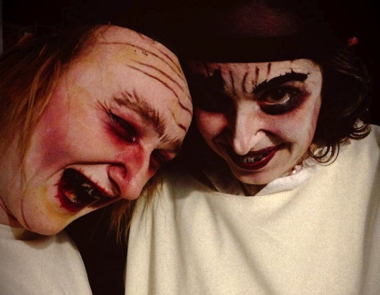 In their signature style, the Grand Guignolers’ 1920s Parisian-themed theatre troupe welcomes guests in a cocktail party atmosphere to enjoy absinthe, drinks and treats (cash/check) in an evening of classic horror plays of the Theatre du Grand Guignol of early 20th Century Paris.

Known as the ‘Theatre of Laughter and Terror,’ grand guignol typically was an evening of alternated drama, farce and horror notorious for its gruesome special effects.

This is a rare opportunity to experience the suspense horror plays that were the precursor to film noir, German Expressionism, and contemporary horror films.

The troupe is joined by the Petits Guignolers—naughty French finger puppets.

Due to violence, this show is inappropriate for children.