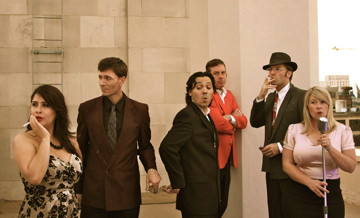 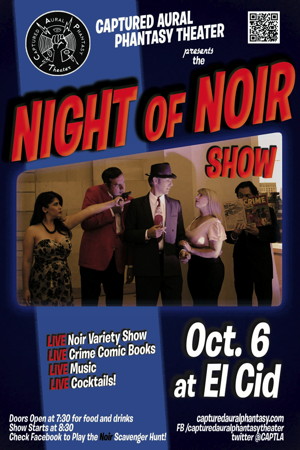 Captured Aural Phantasy Theater (CAPT) presents its Night of Noir Show at the historic El Cid for one night only – Sunday, October 6th. In their newest live retro variety show, Captured Aural Phantasy Theater blows a kiss to their adopted hometown, Los Angeles, by blending hard-boiled culture and the absurd in an evening of performances inspired by LA-centered noir movies, pulp fiction and – of course – the brutal crime comic books of the 40’s. The show features their unique multi-media, old radio show-style performances of vintage noir comics plus projected art, live jazz/cabaret music, and other thrilling acts.

Back in the in the late 40’s, it was crime comic books that dominated the industry. The Night of Noir Show presents LA-centered crime comics in all their gritty glory. The show also is the culminating event of a noir-themed scavenger hunt, the Week of Noir, that Captured Aural Phantasy Theater is presenting the week before the show.

Check their Facebook page leading up to October 6 and unravel daily clues that will take you on a noir quest through Los Angeles.

“We love this city and we want to get our audiences out in it.” CAPT team.

The Night of Noir Show is the newest show in their 5th Anniversary Season and the next installment in their monthly residency at El Cid. They always start the show at 8:30pm, but doors open at 7:30pm so audiences can start enjoying El Cid’s brand new tapas menu and superb cocktails. Get there early to grab a good seat! Enjoy a variety show, music and booze.