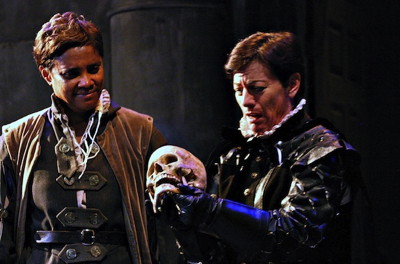 This week’s theater review for the LA Weekly is of an all-female, multicultural production of Hamlet, now playing at Odyssey Theatre in West LA.

An all-female production of Hamlet — why?! The gender-bending (and multicultural) casting permits this motley cast of women to tackle the tragedy’s meaty classic roles but adds nothing to the production. Rather, it distracts and detracts. Lisa Wolpe and Natsuko Ohama co-direct and star (as Hamlet and Polonius, respectively) in a lively rendition that gallops toward its (implied) bloody finale. Yet this tragedy could have used a firmer hand on the reins. Some perfs are good, others woeful. Emphatic gestures and shouted delivery, as well as the random sound design, rob the text of its subtleties, making this ‘Hamlet for Dummies’…