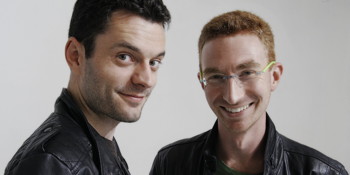 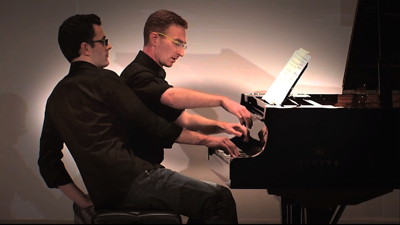 4handsLA—Duo Pianists Steven Vanhauwaert and Danny Holt will be reprising their critically acclaimed Jacaranda performance of Stravinsky’s Rite of Spring celebrating the 100th anniversary of its 1913 Paris debut.

4handsLA is LA’s “dazzlingly young” (LA Times) piano duo. Regular performers on the Jacaranda series in Santa Monica, the energetic artists were introduced as a duo to audiences in 2009 in a performance of Stravinsky’s Rite of Spring.

Steven Vanhauwaert and Danny Holt – both individually Beverly Hills Audition winners – are also active soloists, having performed at Carnegie Hall, Walt Disney Concert Hall, the Concertgebouw, and other venues across the U.S., Europe, and Asia.

Vanhauwaert was the Grand Prize winner of the 2004 Los Angeles International Liszt Competition and his recent tour of China culminated at the National Center of Performing Arts in Beijing.

Holt is a versatile performer known for championing contemporary works. His Fast Jump album (2009, Innova Recordings) received rave reviews from Gramophone magazine and has been heard on radio stations from coast to coast.

The duo’s debut CD Paris 1913—available for purchase at the concert (review pending)—features their signature Stravinsky alongside other contemporaneous four-hand works from Paris by Ravel, Satie, Casella and Poulenc.

Rolling Hills United Methodist Church’s Sundays At Two presents free concerts, September through June. Generous at-the-door contributions (100% are for the artist!) will ensure the success of the series. Please contribute what you can. For concert information, call (310) 316-5574 or click here.