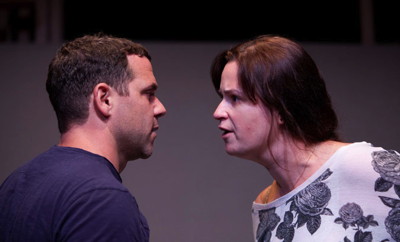 Lost Girls at Rogue Machine has been extended until December 16, 2013

Almost immediately after the central protagonist Maggie (Jennifer Pollono) bustles onto the stage, pretty soon she’s letting fly a string of profanity. We are abruptly dropped into playwright John Pollono’s milieu, inhabited by working class New Hampshire types who are struggling to make ends meet. In his deft fashion, Pollono sketches a portrait of three generations of women, all living in a small and shabby home. Snow is blanketing the windows and Maggie is shitting bricks because she can’t get to work. Forget the snowstorm—that wouldn’t necessarily slow her down—her car has been stolen and she can’t afford to lose this shift, let alone risk losing her job. Her Mom Linda, (played alternatively by two actors, Ann Bronston and Peggy Dunne), is no help. Reluctantly, Maggie calls on her estranged ex-husband Lou (Joshua Bitton), the father of their teenaged daughter Erica and a State Trooper. He shows up with his (relatively) new wife, Penny (Kirsten Kollender) who Pollono has scripted as “seemingly perfect.” She’s blonde and slim—everything single Mom Maggie is not, so tensions increase. When they all learn that Erica is missing, that’s when the shit hits the fan.

Meanwhile, we cut back and forth to a different location. Two runaway teens in a hotel room, played by Anna Theoni DiGiovanni and Jonathan Lipnicki, are seeking an escape from the bitter snowstorm.

Pollono’s play is ostensibly a naturalistic drama but he can’t help lacing his dialogue with hilarious lines. Much of the comedy lies in the way these authentic characters interact; sarcasm and constant ball-busting is bred into their psyche. The incisive way his characters are crafted immediately draws us into his world and the accelerating drama grips us from start to finish.

Special mention has to go to David Mauer for his scenic design. The set converts back and forth from the two locales with an astonishing efficiency, thanks to a mini-turntable and a highly choreographed sequence of prop rearrangement with all hands on deck. It’s quite fun to see the actors pull it off numerous times and it never gets old.

Following the acclaim of his previous play Small Engine Repair which was also staged in the same claustrophobic space at Rogue Machine, back in 2011, Pollono delivers an equally powerful play that addresses similar themes, this time the debilitating cycle of teen pregnancy and single motherhood. Yet here Pollono shifts his gaze from a macho world of posturing males to a sorority, of sorts, demonstrating his range as a playwright and cementing his status as someone whose plays are not to be missed.