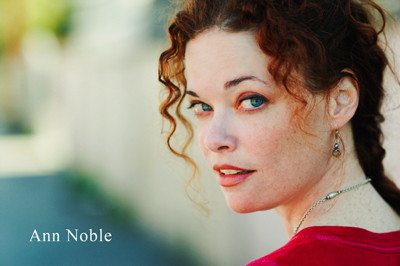 You think you know LA theater? Who’s currently acting in two very different productions — yet considers herself primarily a writer, more than an actor?

She can be spotted in The Laramie Project: Ten Years Later at the L.A. Gay & Lesbian Center’s Davidson/Valenti Theatre, and also in the changing casts of The Liar at Antaeus Company’s space in North Hollywood.

Laramie is a docudrama that examines the aftermath of the 1998 murder of Matthew Shepard in Laramie, Wyoming, a decade later; Noble adopts several roles throughout the play. At the opposite end of the spectrum is her lively role in The Liar, a farce by 17th-century French playwright Pierre Corneille, translated and adapted in 21st-century language by David Ives.  Here Noble engages in witty wordplay while playing a high society Parisienne whose best friend is wooed by a fabulist.

Blessed with naturally red corkscrew curls and piercing blue eyes, Noble is also a playwright. Prior to joining Antaeus three years ago, Noble not only performed in numerous plays at the Road Theatre Company but also was its playwright-in-residence.

To read the rest of this interview & article – please go here.