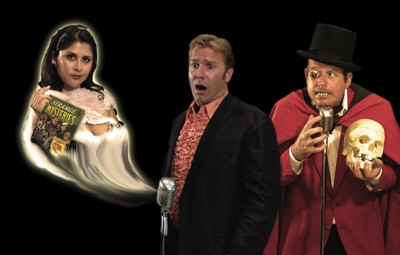 Terror from the page – on stage!

See a girl cut in half!

Watch them raffle off a dead body!

Chilling and Gory Horror Comic Books comin’ at ya, LIVE!

Captured Aural Phantasy Theater is the original comic book / radio / variety show based right here in LA for over 5 years! Accept no substitutes this Halloween season!

The Haunted Horror Spook Show is the newest show in their 5th Anniversary Season and the next installment in their monthly residency at El Cid. They always start the show at 8:30pm, but doors open at 7:30pm so audiences can start enjoying El Cid’s brand new tapas menu and superb cocktails. Get there early to grab a good seat! Enjoy a variety show, music and booze.

This is a BIG year for CAPT! The 2013-2014 season celebrates Captured Aural Phantasy Theater’s 5th Anniversary in Los Angeles. However, they have been playing with the pop culture-variety-show/ comic book-radio-show-style medium for over 10 years. They’ve been featured at many renowned venues around town, including the Alexandria Hotel, i/O West, The Bootleg, the Velaslavasay Panorama and the Nerdist Showroom at Meltdown Comics.

Here’s a sample of what everyone is saying: