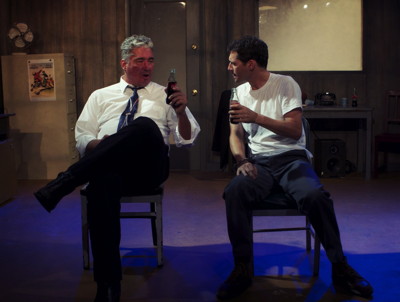 So What Did Happen in Dallas?

Most Americans of a certain age still bear the imprint of that day in Dallas when President Kennedy died.

Like myself and others, writer/director Christian Levantino has had trouble wrapping his head around the official version – the notion that Lee Harvey Oswald was Jack Kennedy’s sole assassin. A nagging skepticism provoked Levantino to write Sunny Afternoon, which speculates on what might have gone down in the Dallas Police Headquarters interrogation room between the time Oswald was apprehended and his murder before TV cameras and in front of millions of Americans two days later. It’s an intriguing effort which, set against the backdrop of what was arguably the most game-changing American crime of the 20th century, provides multiple opportunities for explosive and exploratory drama. Most interesting to my mind is the chance to delve into the psyche of the unsettled unstable Oswald, who advocated for Castro’s Cuba and Soviet communism at a time when this sort of political stance virtually mandated pariah status and FBI persecution.

None of this potential attention-gripping exploration presents itself in Levantino’s 90 minute re-imagining of the crossfire among Oswald (Andy Hirsch), Dallas Police Captain William Fritzi (Darrett Sanders) and an assortment of law officers and government officials from the Dallas Police Department, the D.A.’s office and the FBI. Much of the dialogue is taken up with testosterone-fueled turf rivalry between the cops and the G-men that sounds very much like what you’d hear on any network crime show. The characters, too, are overly familiar: We have, for example, the law officer with a short fuse and vigilante tendencies, and the tough cynical police chief who nevertheless upholds the law and reins in the renegade officer on the edge. Sanders, customarily a superlative performer, here turns in a by-the-numbers rendering that displays his considerable craft but still makes you think that you’ve tuned in to some series (perhaps cable rather than network). More problematic is Hirsch’s portrayal of Oswald: a compendium of mannerisms and responses (seemingly drawn from the historical record) that never coalesces into a character that I, at least, could believe in. A couple of the supporting performers work to establish individually developed personas, but the tendency among this mostly capable ensemble is to take blustery shortcuts in fashioning their performance.

What would have made the play infinitely more compelling is if there had been at least one character who reacted to the magnitude of the event, who reflected either the sorrow or the shock of it or both. The most we get is a hard-boiled secret service agent (Donnie Smith) commenting (and I’m paraphrasing from memory here) about how awful it is to have seen a pretty lady clutching her husband’s brains.

For conspiracy theorists the final scene is probably the most satisfying: a “Manchurian Candidate” type of reveal in which someone posing as Oswald’s attorney (Mark St. Amant) makes plain that he is the suspect’s manipulator. Amant is appropriately controlled and controlling, and though his character’s final unspoken gesture is over-the-top, it does convey what many of us stubbornly believe to be true.