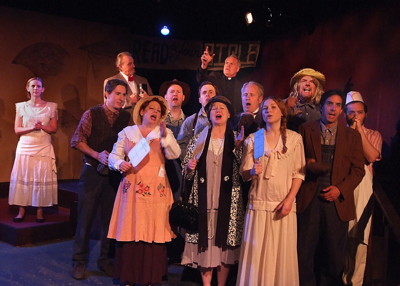 One would have thought (perhaps hoped is the better word) that Jerome Lawrence and Robert Edwin Lee’s 1955 play Inherit the Wind, about the 1925 Scopes “monkey” trial, would have lost some of its relevance by now. Like Arthur Miller’s The Crucible, it was written in response to the close-mindedness and prosecution of freedom of thought that swept through the nation during the McCarthy era of the mid twentieth century.

But last year, in a small community in Minnesota, a production of the play was cancelled after a religious group protested its content and the director and most of the cast withdrew under pressure from faculty at Martin Luther King College where most of them were attendees.

And it was only a couple of weeks ago that Bill Nye ‘the science guy’ battled Kentucky Creation Museum president Ken Ham before a nationwide audience over the factuality of evolutionary theory. Ham’s creationist views aren’t just those of an out-of-touch pocket of the American populace. Forty to fifty percent of Americans believe in the Genesis creation story, according to polls, meaning the anti-intellectual, anti-science tradition in the U.S.—from whom the cynical anti-climate control business interests draw their gullible minions—is alive and well and threatening the well-being of the planet.

Which is one reason why even a mediocre production of this play—in which rationality and intellectual common sense triumphs over ignorance and superstition—can be so satisfying to watch. Based on an historical event, which pitted legal titan Charles Darrow against the celebrated populist hero William Jennings Bryan, it takes place in the courtroom of a small town in the South where a gentlemanly young schoolteacher, Bert Cates (Robbie Winston) is on trial for teaching evolutionary theory. A reporter from the big city, E.K. Hornbeck (J. Richey Nash), is on hand to report on the clash between rumpled defense attorney Henry Drummond (Mark Belnick) and the Bible-thumping prosecutor, Matthew Harrison Brady (Robert Craighead). The emotional price for this conflict is crystallized in the character of Cates’ lady friend, Rachel (Laurel Reese), torn between her love for Bert and her loyalty to her father, the town’s theocratically inflexible Reverend Brown (Alan Brooks). Besides Rachel, there are many other townsfolk shy of challenging authority, people whose unquestioned veneration for the Bible and for Brady as its trumpeter serve as provender for the prosecution.

All this makes for highly propitious drama, even as it creates challenges for any director working with a large cast on a small proscenium, as is the case here. So while director Kiff Scholl maneuvers his actors with veteran skill, you can’t help but be aware of the venue’s tight space and limited lighting—a function of the equipment rather than a lapse on the part of lighting designer Michael Gend. As for the performances, the best work emanates from seasoned players in minor roles: Edmund Wyson as the obtuse mayor, Donald Agnelli as the myopic judge, Brooks as the reverend and David Reynolds as Cates’ friendly and unmindful jailer. As the gentle science teacher who’s risked his freedom for principle, Winston underplays to great effect.

But ultimately the power of the drama can be measured by the strength of the two leads, and here the production disappoints. With his expressive face and unassuming ambling gait, Belnick aptly reflects that blend of cynicism, intelligence and compassion so suited to the role of a sagacious barrister. But his cross-examination of Brady—the crucial highlight of the play—lacks passion, precision and fire. Likewise, Craighead looks and sounds like a doctrinaire gasbag and religious zealot, a worthy target for our contempt, but fails to capture the pathos underneath the surface. The playwriters’ tale reverberates despite these shortcomings, but you can’t help but wish it could do so with more subtlety and depth.

Inherit the Wind by Jerome Lawrence and Robert Edwin Lee