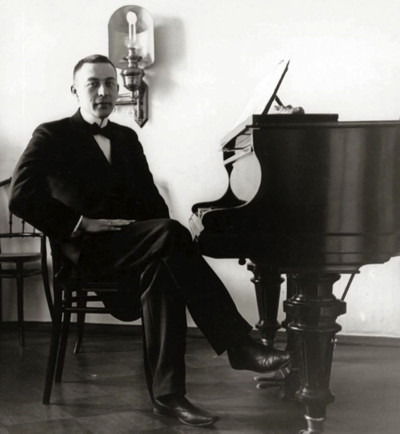 The fifth of nine concerts of Le Salon de Musiques’ 4th season was entitled An Evening with Russian Romantics. And what a splendid event! Famous pianist and writer Mona Golabek was joined by award-winning violinist Movses Pogossian, and principal cellist of the LA Opera John Walz, as well as Edith Orloff on piano, for an afternoon concert that featured the works of three genius Russian composers: Rachmaninoff, Medtner and Arensky.

On violin, Pogossian played like a dream, his animated dark bushy eyebrows conveying the expression in his performance. How often do you get close enough to see the rapture on the face of a world-class musician exquisitely playing a heart-rending theme?

Dubbed “the greatest composer of our time” by his best friend Sergei Rachmaninoff, Nikolai Medtner was also a supremely talented and gifted pianist. The Russian composer wrote a substantial number of compositions, all of which include the piano, including: fourteen Piano Sonatas, three Violin Sonatas, three Piano Concerti, one Piano Quintet, three works for two Pianos, and more than hundred songs.

There is, thus, something of a paradox in the fact that Medtner spent for the last thirty years of his life in poverty…

As always, the afternoon’s program began with an introduction from the artistic director and curator of the series, Francois Chouchan, as well as one from musicologist Julius Reder Carlson explaining some of the historical background of the pieces. Together they fanned our anticipation of the afternoon’s musical entertainment.

As customary, the performance was followed by an informal conversation between the musicians and the audience while sipping French Champagne and enjoying a gourmet buffet prepared by Patina.

“An Evening with three beautiful Romantics.”

The sixth Le Salon de Musique concert will include the US Premiere of two exciting works by Franz Xaver Scharwenka (6 January 1850 – 8 December 1924).

Franz Liszt’s “Three Sonnets of Petrarch” are better known in their Piano solo version through the beautiful “Annees de Pelerinages.” They were originally composed as songs in 1838, inspired by readings of Dante and Petrarch, when the Composer and Comtesse Marie d’Agoult had their love affair while staying at Lake Como. Liszt composed about six dozen original songs with piano accompaniment: nearly entirely forgotten, these extraordinary songs are so representative of the deep Romantic Age.

X. SCHARWENKA: Sonata for Cello & Piano in E minor Op 46A US PREMIERE

Purchase one ticket or two tickets for their SUNDAY MARCH 9 SALON DE MUSIQUES, featuring an exquisite Romantic Program by X. SCHARWENKA with two USA PREMIERES, along with F.LISZT and C.SCHUMANN, and you will receive one or two complimentary mezzanine level tickets for MONA GOLABEK’s one woman show at the GEFFEN PLAYHOUSE.

You may select tickets for either of the following three performances only:

Once you have made your purchase, you will be provided via email the code and directions for securing the complimentary tickets to the Geffen.

“Embark on a Romantic Viennese Journey” with David CASTILLO Baritone,

For Tickets or Info, call Kele:

(This event organized and catered by The Beverly Hills Country Club.)

Hailed for his remarkable creativity and sensitivity for chamber music, French-American pianist Francois Chouchan is no stranger to awards and fame. From the Conservatoire National Superieur de Musique de Paris where he was instructed by Yvonne Loriod-Messiaen, Rostropovitch, Magaloff, and Sebok, to the Viotti International Piano Competition, Chouchan has performed as a solo pianist with major orchestras and venues across the globe. Chouchan has been the Founder, Producer and Artistic Director of Le Salon de Musiques since 2010.