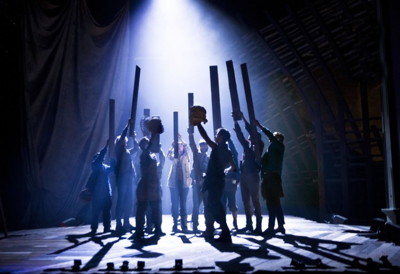 Now playing at The Broad Stage in Santa Monica.

South Africa’s Handspring Puppet Company recently gained acclaim for its collaboration with playwright Nick Stafford and the Bristol Old Vic’s production of War Horse. The Tony-Award winning phenomenon made its world premiere at the National Theatre of Great Britain’s Olivier Theatre in 2007, and later played in Los Angeles at the Ahmanson Theatre, in 2012. A unique theatrical experience that combined intense drama with elaborate staging and dazzling puppetry, War Horse was essentially a love story between a boy and his horse. At the heart of the show were full-sized puppets that brought breathing, galloping and charging horses to life on stage.

Adrian Kohler, Artistic Director of Handspring and designer of the dream puppets spoke with Stage Raw about his creations in the show.

ADRIAN KOHLER: The overall concept for the puppets designed for A Midsummer Night’s Dream was that every object has the right to life. Hippolyta is building a pair of votive figures to bless the pending marriage to Theseus about which she is feeling rather dubious. He beat her in battle after all… But other objects — the tools in her workshop, the boards in her walls — all start to manifest her unease.

STAGE RAW: How long did it take to realize this project — from early concept meetings to first opening night?

AK: [The show’s director] Tom and Basil [Handspring colleague Basil Jones] and myself all talked about it shortly after War Horse opened in 2007. It went in and out of focus for a good few years. Then we began talks in earnest about a year and a half before we began rehearsals. There were two intensive workshops with Vicki Mortimer, the [set] designer, and some actors, before the final design and build.

SR: Can you briefly describe the various kinds or styles of puppets that were created?

“The smallest puppet is a bee made from a modified wind-up toy. The largest are the two votive figures, bits and pieces of which are used until they are finally fully assembled. There are some rod-puppet fairies that look like remnants from an old fairground. There are some umbrella-like jelly fish that swim about. A number of styles, really.”

To read the remainder of this article, please go here.

A Midsummer Night’s Dream  continues at Santa Monica’s The Broad Stage until April 19, 2014.