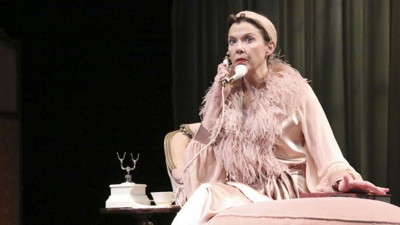 Four monologues written by diseuse Ruth Draper are brilliantly performed by Annette Bening as a 90-minute one act evening of entertainment. This new show at the Geffen begins nicely enough, with a couple of odd character pieces. The first is a slightly bizarre speech and movement class and lesson “in Greek poise” led by a woman who congenially barks instructions and gambols and rolls around the stage. She demands that her unseen students (presumably middle-aged, middle class women) “be an earthworm! stretch and limber yourselves!” as she teaches them how to express themselves through movement.

The second monologue is of a young woman dressed in the style of the day — a 20s flapper party dress — who is confiding her insecurities to an unseen companion. “My friends laugh at me. They say I am much too serious minded…” she laments, as we form an impression of an insecure young person.

In the early-to-mid part of the 19th century, Ruth Draper virtually invented the monologue as a new dramatic form. Her wry character studies of the manners and habits of people she observed gradually build to become a mildly satirical and wildly hilarious portraits. Her keen eye and sharp wit offer us an amusing glimpse of her contemporaries.

Bening deftly executes several quick changes of costume, leaping from one character to the next, while seated upstage at a dressing table, behind a gauzy curtain. The costumes designed by Catherine Zuber are exquisite period outfits each of which perfectly complement the character portrayed. The sets are minimal, gliding on and offstage when needed, and elegantly devised by scenic designer Takeshi Kata.

The third monologue is when it really starts to get interesting. A socialite takes luncheon at her favorite place to be seen, dining — I use the term loosely — with three imaginary companions. All of the women are on strict diets, so the detailed instructions our heroine extracts from each companion and then relays to the waiter — “the juice of 100 lemons… one turnip on a plate, lightly boiled…” are increasingly hilarious. It all adds up to scene of galloping absurdity.

By the fourth and final superb monologue, Bening — along with Draper — has really found her stride. Garbed in a flowing column of rose colored satin, trimmed with rose-dyed ostrich feathers that shed profusely, Bening portrays an upper middle class woman who, with immense poise, grace and maintained concentration, negotiates a parade of interruptions to her in-home private Italian lesson. Presiding over a busy household, she appears to be maintaining a dominating presence without ever raising her voice. The small children keep coming in, then later they come in with the new puppy. Various people telephone and our grand dame commandingly issues numerous detailed instructions to her help as she holds the poor hapless person hostage on the other end of the line. We then hear enough of the gossipy conversation to piece it together. One call is a series of instructions from her husband that she later relays to her maid with astounding accuracy. It’s a masterful and highly revealing portrait of a high society character very much in her element, that slyly — when an assignation is set with a mystery caller — reveals some insight into her situation with such subtlety that you almost miss it.

The writing of these monologues is superb but Bening’s execution of them in performance is astoundingly good. So precise, so perfect — this, in short, is brilliant material exquisitely performed by an actress of high caliber. That such an acclaimed star of stage and screen respectfully defers to the highly detailed text — never once delivering any attention-seeking moments or flourishes that could be described as a ‘star turn’ — makes this a highly rewarding night of theater.

Available in-person at the Geffen Playhouse box office, via phone at 310.208.5454 or online here.