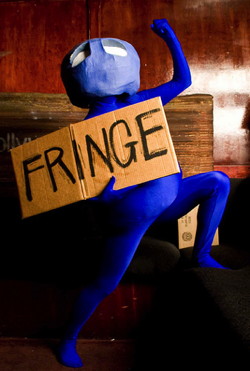 The Hollywood Fringe Festival (HFF) in back this June for its fifth year. The lively theater and music festival has been growing since its inaugural year in 2010, when Artistic Director Ben Hill, the all-important Communications Director Stacy Jones Hill and their tireless team first carved out a space in the LA arts calendar. Their intention of becoming an annual celebration of the emerging arts and a theatrical extravaganza was met, and the highly popular fest is now approaching their fifth summer. Savvily concentrating an abundance theatrical energy within one geographical area—central Hollywood—last year saw over 200 shows presenting more than one thousand performances at over a dozen Hollywood venues. It was calculated that an astonishing 25,000 theater seats were filled. Expect one-person shows, new musicals, comedies and edgy dramas to descend on Hollywood once again.

Great news! Tickets are now available for the 2014 Hollywood Fringe Festival (#HFF14), where over 275 performing arts productions will be presented on more than fifty Hollywood stages.

The ‘official’ festival takes place over an intensive 18 days — June 12th-29th — with a week of previews being staged June 5th-10th.

To purchase tickets, patrons can visit the Fringe’s website and there they can search for shows by time, venue, category or tag. Tickets will also be available for purchase through the Fringe app which will be released in the coming weeks.

The Fringe offers festival-wide community discounts for Fringe-goers who choose to purchase a Fringe Button. The perqs of a button include $1 off all tickets at the Fringe, drink discounts at Fringe Central, and access to Fringe-run events.

The Fringe website is the only place you can buy tickets for all 1,500-plus festival performances, but venue-specific tickets will also be available at the box offices of the theaters, bars, and outdoor spaces participating in this years fest. Go here for a comprehensive list of this year’s venues.

ABOUT HOLLYWOOD FRINGE:
The Hollywood Fringe Festival is an annual, open-access, community-derived event celebrating freedom of expression and collaboration in the performing arts community.  Each June during the Hollywood Fringe, the arts infiltrates the Hollywood neighborhood: Fully equipped theaters, parks, clubs, churches, restaurants and other unexpected places host hundreds of productions by local, national, and international arts companies and independent performers.

Those seeking more information can contact the festival via email here or visit the official website here.