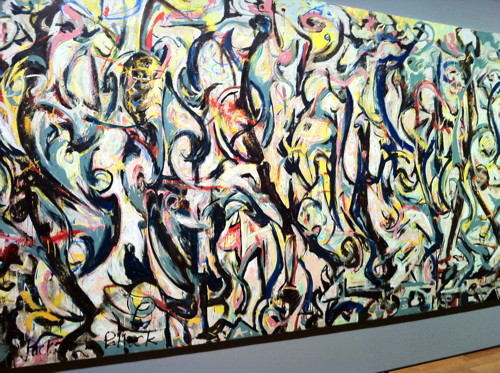 Here is my recent feature article for the Stage Raw site —

American Artist Jackson Pollock’s large-scale masterpiece, the abstract impressionist work Mural, has been newly restored and is currently on view at The Getty Center until this weekend.

The legend behind its creation and painstaking restoration imbues this striking painting with a rich backstory.In 1943, Pollock was a promising New York artist who had come to the attention of Peggy Guggenheim (whose father was a casualty of the RMS Titanic). A wealthy socialite and a bohemian, an international jetsetter and art dealer, Guggenheim hobnobbed with the most famous artists of her day. Her art collection and legacy of patronage remain one of the greatest gifts to this country. When the dogma (that the arts should be self-supporting or aren’t worthy of being) rears its serpent’s head, one need only look to the patronage system through the centuries, Lorenzo de’ Medici, Queen Elizabeth I, King Louis XIV and Peggy Guggenheim, who supported the likes of Michelangelo, Shakespeare, Moliere and Pollock. It was patrons who allowed their art to breathe for subsequent generations.

In July 1943, Guggenheim offered a gallery contract to Pollock, a commission to create a work, roughly eight feet tall by 20 feet long, to be displayed in entry to her new Manhattan townhouse. Though originally commissioned by Guggenheim as a mural, surrealist artist Marcel Duchamp advised Guggenheim to have Pollock paint it on canvas rather than on the wall, in case she eventually moved.

She did relocate to Venice, Italy, shortly after the end of World War II, but the painting remained in the States, enjoying an itinerant and somewhat forgotten life until it found a home at the University of Iowa. It was likely rolled and stored and unrolled at least five times as it moved from Pollock’s studio, to Guggenheim’s entrance hall, to Vogue Studios (for photography), to New York’s Museum of Modern Art, to Yale University, and finally, in 1951, to the University of Iowa Museum of Art, to whom Guggenheim eventually bequeathed it.

To read the remainder of this article, please go here.