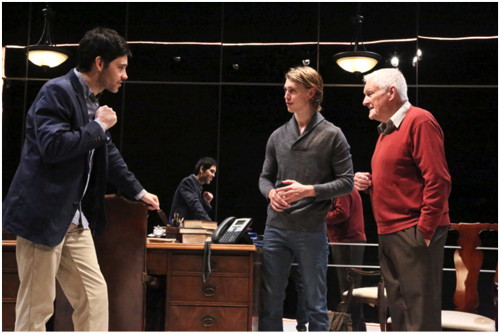 I was simultaneously aroused and intimidated by the intelligence of playwright Steven Drukman’s Death of the Author. This play is highly recommended – but be advised, if you’re not conversant in the theories of semioticians Roland Barthes and Jacques Derrida, a quick Wikipedia search before the show may be in order. Despite its lofty conceits, this play itself is human and accessible. Best of all, I walked out thinking.

Death of the Author is an adventure through literary post-modernism, academic bureaucracy, and intellectual homoeroticism. The plot revolves around a student’s plagiarism (or, non-authorship) in an essay about the titular death of the author – see the irony? Questions about the existence and value of authorship, authenticity and intention are interwoven into human plot lines with plenty of pain and pathos. There’s the question of plagiarism, plus a potential gay romance, reunited lovers, a disease — even a traumatic accident. Did I mention it’s also hugely funny? Bizarrely, yes. Director Bart DeLorenzo keeps the pace cracking and the jokes feeling fresh.

Austin Butler is compelling as heartthrob student Bradley, managing to make him at once aristocratic, bumbling, sweet, and manipulative. David Clayton Rogers plays his not-much-older professor Jeff, a gay man from a lower-class background who struggles with his position in the Academy. Orson Bean is a stand-out in a supporting role as J. Trumbull Sykes — the wry, world-weary chair of the department who has seen it all before and shepherds the plot along with palpable love. Every time he steps onto the stage is a joy. Lyndon Smith has a small but crucial role as Bradley’s ex-girlfriend Sarah. It’s the only female role, and her part is sadly underwritten.

Takeshi Kata’s set makes a strong impression as soon as the audience enters the space and his scenic design deserves its own mention: Kata has built a box of mirrors. The set literally holds a mirror up to the characters in every scene, creating doubles and displaced bodies to raise visual questions about originals and copies that fit with the plays themes. The play refers to the academic office as a prison, and the mirror’s effect is appropriately cold, industrial, and self-reflective. It’s a brave, non-naturalistic choice, and I like it.

Although the play loses momentum and some believability at the end, settling for a bittersweet happy ending, the lead-up is satisfying enough for me to buy it. Sure, it’s a white, male, college-educated story that owes a lot to David Mamet’s Oleanna, so Drukman’s not exactly breaking ground here, but his play is well devised and executed. As a friend recently remarked about another show, “It’s about white people and their feelings…” and I find that I’m fine with that. I laughed a lot and left the theater thinking a bit more critically, more deeply, than I did when I arrived. Any work of art that accomplishes something like that, in my eyes, is a small triumph.

Death of the Author