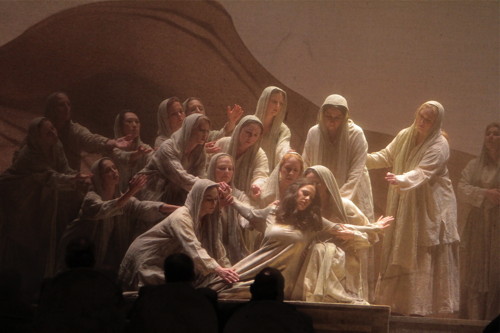 Thaïs depicts a courtesan’s voluptuous lifestyle and the exquisite romantic tragedy created a bit of a scandal when it made its premier in Paris in 1894.

I was delighted when L.A. Opera announced its plans to produce it this season. I love Massenet’s operas. Though he composed over 25 operas – including the well-known Werther and Manon – many of his operas sadly have fallen from regular repertoire. Opportunities to see Thaïs – the story of a 4th century Egyptian courtesan and a monk who pursues her while trying to save her soul – seldom arise. In short, Thaïs is generally revived as a star vehicle for sopranos. Beverly Sills sang the role in New York and San Francisco in the seventies. More recently, it was revived in New York for Renee Fleming. Of course, there are numerous recordings of the opera available that feature a variety of divas who were drawn to the role of the courtesan sinner turned saint.

Here in Los Angeles, the opera has been revived as a star vehicle once again. That star is L.A. Opera’s general director and favorite tenor-turned-baritone, Placido Domingo, as the overzealous monk who tries to save Thaïs’ soul and – in doing so – loses his own. The moral message, very much of the time and place in which Massenet was writing (the Parisian Belle Époque of the late 19th century) about the dangers of self-righteousness, is clear and well delivered, even in Domingo’s generalized acting. It’s a message that has appeal to our own time as well. Domingo gives an energetic performance, but lacks the vocal resonance that a true baritone would bring to the music. He fails to convey the irony of the misguided religious man who loses his religion, just as the woman he saves, finds hers. His is an adequate performance that, regrettably, misses some dramatic opportunities.

Musically, the highlight of the night is the brilliant playing of the orchestra under French conductor Patrick Fournillier, a Massenet specialist. The famous ‘Meditation’ was beautifully played by concertmaster Roberto Cani. And in Georgian soprano Nino Machaidze, Los Angeles has a diva who was more than up to the challenge of the title role. Despite indistinct French enunciation, Machaidze was a spectacular Thaïs, in gorgeous voice and quite touching in the opera’s final apotheosis. The rest of the performers, including tenor Paul Groves as Thaïs’ wealthy patron Nicias, and mezzo soprano Milena Kitic as the abbess Albine, offered fine support.

The production is effective, a Belle Époque theater that revolves and morphs into a desert oasis, then a monastery and finally a convent. The costumes for Thaïs, particularly our leading lady’s winged entrance costume, are spectacular, befitting a woman at the height of fashion in her society. Dressing the monks in top hats and tails – another nod to the Belle Époque era – created some confusion among the audience about the identities of the performers…

One performance remains – Saturday night. Take advantage of the chance to enjoy an excellent performance of a relative operatic rarity while you can.

More information on Thaïs can be found here.