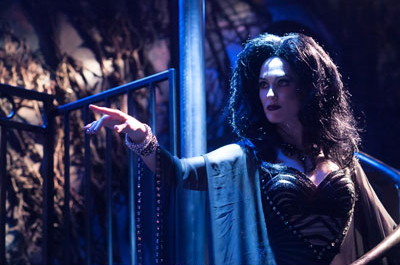 Most of you will be familiar with the plot of Oscar Wilde’s classic novel, The Picture of Dorian Gray, from its numerous film and television incarnations, most recently referenced in Showtime’s Penny Dreadful. In Wilde’s story, which draws from the Faustian legend, an attractive and hedonistic young man poses for a portrait. Obsessed with youth and beauty, he pledges to sell his soul to remain young while his portrait ages instead. As Dorian plunges into a life of debauchery, that’s exactly what happens.

Dorian’s Descent is a musical version of this story that’s making its premiere at the MET Theatre in Hollywood. Here most of Wilde’s characters are present, including Dorian Gray (Michael D’Elia), the artist Basil Hallward (Jeremy Saje), Lord Henry Wotton (Kelly Brighton), the actress Sibyl Vane (Cassandra Nuss) and her brother, James (Tony Graham). A new addition is a literal demon (Toni Smith), who accepts Dorian’s damned soul in exchange for eternal youth.

This DOMA Theatre Company production is certainly ambitious, but it is also busy, noisy and derivative. In an effort to bring Wilde into the 21st century, the creators threw everything into the mix, referencing shows like Chicago and Pippin and composers like Schwartz and Sondheim — and the resulting musical simply cannot support all that weight. Director Marco Gomez, co-writing the lyrics with composer Chris Raymond, really piles it on — and it’s all too much.

The first problem is the score. The songs are reminiscent of popular Broadway shows, but the lyrics are numbingly repetitive. Not only that, they’re served by the bucket load. The first act has sixteen credited musical numbers while the second has eight. When I first looked at the program and saw so much music, I thought this had to be an opera. But it has a book, too, and that’s the second problem. The book, written by Gomez and Michael Gray, outlines the derivative lyrics that the characters are getting ready to sing. And sing they do… again and again and again. For close to three hours.

The third problem is the staging. The cast is quite large and has background performers continuously appearing in different costumes. Speaking of costumes, designer Michael Mullen must have worked 24 hours a day to create what seems like hundreds of changes. Characters keep showing up in sharkskin suits, glittery disco getups, prom dresses, and bird outfits. It’s like Grand Central Station in drag.

Now for the positives: John Iacovelli’s set looks good, and Jean-Yves Tessier’s lighting is quite effective. Raymond’s orchestra sounds fine, and all the performers sing well, with the chorus sounding especially nice. It’s such a shame they didn’t have finer lyrics to sing.

I’ve seen some good stuff staged by DOMA (Tommy) as well as some travesties (Jacques Brel). The company tends toward musical super productions, but frequently these lofty ambitions can result in a jumbled end-product. Such is the case here.

This article originally appeared on Blogcritics.

A devotee of odd culture, his obsessions can be found at Weird Movie Village.