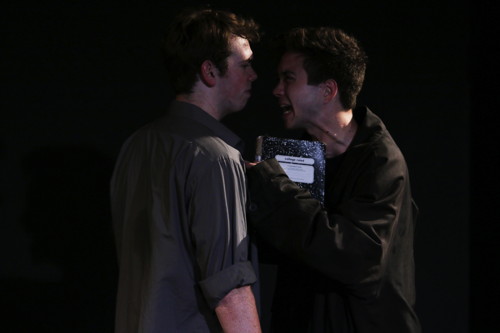 A TV writer/producer for most of his lengthy career, David Castro has now tried his hand at playwriting, and the resulting one-person play, Man’s Dominion, is not as emotionally gripping as one might expect from the subject matter. Castro was seized by the tragic turn-of-the-century tale of a circus elephant’s lynching. In a small Tennessee town in 1916, an Indian elephant named Mary lashed out at an inexperienced and brutal trainer, stamping on his head. For this murderous act, the beast was hanged.

The playwright adopts the typical, no-frills approach of having a sole actor inhabit a virtually bare stage and adopt numerous characters. By doffing a hat, buttoning his collar or affixing a red nose, Tim Powell (pictured) portrays nine distinct characters from clown to clergyman, each also delineated by a broad accent – an Irishman’s lilt, the drawl of a Southerner, and the cadence of a black man. Castro also has Powell adopt the persona of the slain man — for whom the elephant was killed — in an interesting, ghostly choice.

For his social commentary, Castro’s language is equal parts vivid and ploddingly explanatory, tapping into 1916 attitudes that ranged from remorse to outrage. Some sequences are insightful, though, such as a short speech that reveals the harsh realities of a physically taxing career in the circus. Additionally, this curiosity-piece of a play holds a neat little surprise in the stalls for its audiences.

Gregory Crafts’ drama Friends Like These tips its hand during its prologue. In the pitch-dark theater, we hear a montage of news coverage and eye-witness accounts of a shooting rampage at a high school. The lights then come up on a trio of teens wielding foam swords, garbed in medieval attire, spouting archaic English. It’s confusing for a moment until we realize these three are merrily participating in a “Live Action Role Playing”game. Nerdy Garrett (Scott Sharma), Emo girl Dis (Sammi Lappin) and sometime jock Brian (Sean Casey Flanagan) are geeky gamers who hang out together, copping a fair amount of bullying and daily abuse from the cooler kids at their school. Their only escape is acting out these guided fantasy war games in a realm called Haven.

Crafts does a good job of capturing the nightmare of daily abuse —particularly the vile homophobic slurs that assault Garrett —and offers sympathetic insight into those unpopular teens who are pushed to a murderous breaking point. Crafts also seems to hew too closely to stereotypes —the jock, the freak, the cheerleader —even as he attempts to break them down. Hence, we have a conceited cheerleader Nicole (Parissa Koo) who is trying to break out of her assigned category —“slut” or “airhead”—by attempting to date one of the nice guys who happens to be a geek. Her object of affection, Garrett, is hostile at first, but soon warms to the bubbly, motor-mouth girl. But Nicole’s ex-boyfriend Jesse (Lee Pollero), is the most dangerous bully on campus and soon he’s ramping up his attacks on Garrett.

A highlight of Wendy Gough Soroka’s direction is the simple but effective staging of a battle sequence that beautifully captures the chaos of pretend warfare. The music supervision is also exemplary, with the Beastie Boys’up-tempo pop hit “Sabotage”selected for this scene. Swift scene changes are underscored by apt snippets of songs such as The Offspring’s rock anthem “Come Out and Play (Keep ’em Separated)” — emphasizing the school’s pecking order.

Friends Like These begins by provoking belly laughs but soon moves into heavy melodrama fraught with devious machinations and speechifying. Adolescence is a high-drama era and, regrettably, not everyone gets out alive.

Friends Like These
Theatre Unleashed at Theatre Asylum’s Elephant Space,
6320 Santa Monica Blvd.,
Through June 28, 2014 in the Hollywood Fringe Festival.
Check its official listing for reservations and information.