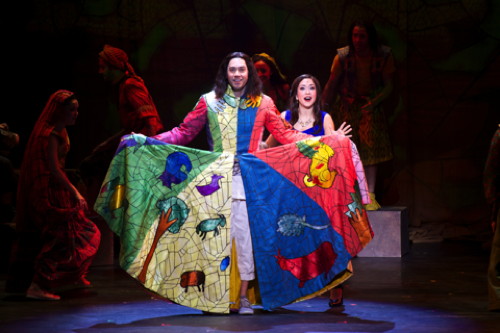 Tim Rice and Andrew Lloyd Webber’s early 70s musical Joseph and the Amazing Technicolor Dreamcoat has been given a frantic, up-tempo makeover. The unimpressive and crazily fast-paced show stars two American Idol alums in the two leads roles: Diana DeGarmo as “The Narrator” and Ace Young as Joseph. Joseph is showing at the Pantages Theater in Hollywood until June 22.

Based on the ‘coat of many colors’ tale of Joseph from the Bible’s Book of Genesis, the musical has lyrics by Tim Rice and music composed by Andrew Lloyd Webber and runs the gamut from rock, pop, country to disco. Interestingly, it was the first Lloyd Webber and Rice work to be performed publicly. The pair each went on to achieve fame with far better compositions such as Jesus Christ Superstar, Phantom of the Opera and Evita.

Short and sweet, the show runs at less than two hours, including a 20 minute intermission, and races along at a frenetic pace. Clearly the producers don’t think their audience has much of an attention span as it was like watching a Grand Prix car event!

While the voices were fine for this unchallenging and lightweight musical, Ace Young performed the leading character of Joseph with a huge goofy, rictus grin plastered all over his face the whole time — even when he was imprisoned! It was actually ridiculous.

A highlight was an Elvis impersonator and the routine he does with his the disciples.

The scenic design by Beowulf Borutt— if you can even call it that — is extremely cheap, with cloths and projections standing in for actual sets most of the time. Lame!

Under Andy Blankenbuehler’s questionable direction, this tired old musical is pretty bad, but rest assured it’s all over pretty soon.

Joseph and The Amazing Technicolor Dreamcoat

FINE PRINT:  Select seats in Price Level 2 are $39 (Reg. $85)  on Tue, Wed, Thu, Fri and Sun evening performances June 13 – 22, 2014. Subject to availability. Not valid on previously purchased tickets. May not be combined with any other offer. Customary Ticketmaster convenience fees apply to all online and phone orders. Offer may be cancelled at any time.