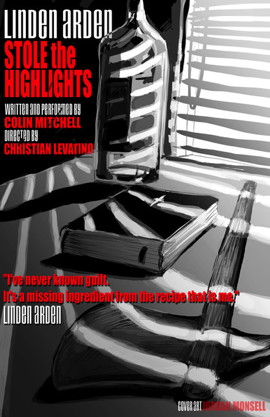 I’d never heard Irish singer/songwriter Van Morrison’s “Linden Arden Stole the Highlights” before I saw Colin Mitchell’s play of the same name. Frankly, it doesn’t matter, because Mitchell has taken the rather obscure lyrics of that 1974 song and created a fully fleshed-out character whose story makes for riveting theater.

Arden’s tale begins in the 1980s, in San Francisco’s Tenderloin District. “Little Lindy,” as he is nicknamed, carves out a reputation for himself as one of the most efficient drug runners in town. Going up against all sorts of tough customers, he proves his mettle again and again. When he decides that his boss won’t miss some of his cash, he escapes to Scotland, the land of his forefathers, where he plans to live out his life in blissful anonymity.

He settles in the tiny village of Arklow, gradually becoming part of the community — the Yank with the deep pockets who’s always willing to help improve public buildings or give a loan to someone in need. Two peaceful decades pass before his old boss finally tracks him down and sends his henchmen to Arklow for retribution.

Mitchell breathes life into Arden by way of a lively, compelling monologue. Supplying the voices of the various characters he encounters, he paints a colorful picture of Arden’s milieu, from the mean streets of San Francisco to the bucolic highlands of Scotland. Acknowledging the audience from the very start, Mitchell (as Arden) asks, “Are you really here?”, and even serves up drinks before settling in to his tale. He also grants himself legendary status by insisting that Van Morrison must have heard his story, believing he inspired the musician to celebrate him in song. Such behavior makes one question the state of Arden’s mind, but this question is left unanswered… and that’s how it should be.

Mitchell hasn’t performed the show in Los Angeles since the late ’90s, so this is an opportunity not to be missed. This production was directed by Christian Levatino and produced by Rose Desena.

Consult the Fringe schedule for times and to make reservations.

This review originally appeared on Blogcritics