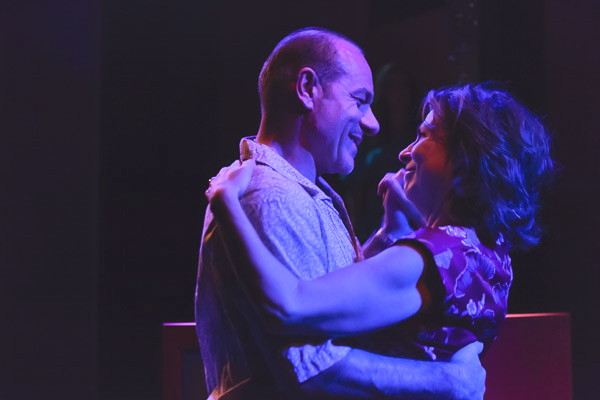 My latest theater review for the new critical website Stage Raw — which contains the latest arts and theater coverage from our intrepid team of journalists & critics — is out now.

In the Boom Boom Room is now playing at the Hudson Backstage until August 3, 2014.

David Rabe’s play In the Boom Boom Room is over forty years old, and it’s certainly a charmingly dated curiosity piece. Performed on Broadway in 1973 (and nominated for a Tony award for Best Play), his strange and messy drama has been revised and remounted a few times over the years, expanding to a three-act play before returning to its present two-act form. Even so, In the Boom Boom Room runs over two and a half hours with intermission.

All in all, the play proves a fascinating attempt of an educated male playwright to understand and present the psyche of a poorly educated female protagonist wrestling with her sense of identity during a tumultuous era. Set during the preceding decade, i.e. the swinging sixties, we meet our bubbly heroine just as she is embarking on a career as a dancer. Voluptuous, naive and enthusiastic, Chrissy (Kate Bowman) is a novice go-go dancer in a seedy nightclub. She articulates her dreams of achieving stardom through ballet but there’s absolutely no indication of any former training nor even any comprehension of what’s entailed with that challenging vocation. Instead, she gyrates to popular music wearing skimpy outfits for leering men.

Chrissy seems to love the attention but doesn’t know how to handle the men and women that enter her life. There’s the effete and intrusive neighbor Guy (K. C. Lindley), who declares his ‘gay’ status while rifling through her things. A goofy suitor Eric (Corby Sullivan) repels Chrissy with his sappy protestations of love. Two thuggish crims — club patrons — Al (Eric Geller) and his scrawny sidekick Ralphie (Juan Lozano) barge into Chrissy’s apartment and dominate her world, meeting little resistance. Susan (Kristina Miller), the most experienced dancer at the club, takes Chrissy under her wing but their friendship eventually suffers an irreparable fracture. Meanwhile Chrissy struggles to comprehend some vague memories of perplexing abuse that occurred when she was a child.

Scenes involving her parents Harold (Cris D’Annunzio) and Helen (Theresa Tilly) are not well handled especially since the lighting is not consistent. At first there appears to be a nice frisson as the audience ponders if these scenes are real or simply the product of Chrissy’s vivid imagination and symptomatic of her increasing psychosis. Then a scene between the parents minus Chrissy torpedoes that theory.

Some of the actors speak with a strangled regional accent to reflect the play’s Philadelphia setting, but it mostly comes across as either a drawling surfer dude (think Spicoli in Fast Times at Ridgemont High) or some accent reminiscent of New York’s outer boroughs.