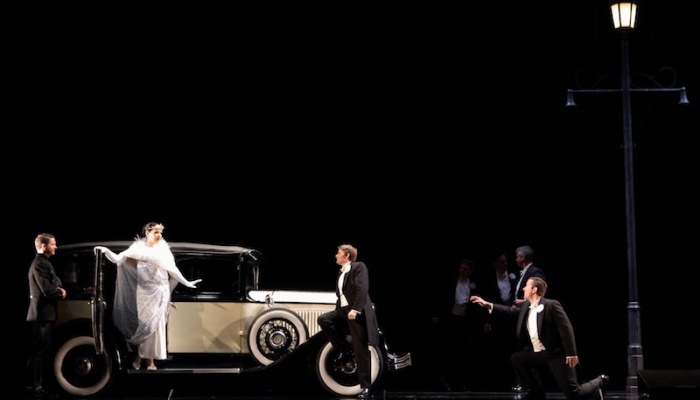 Hello opera and #LAThtr fans!
Here is an intro and link to our first opera review for the critical website Stage Raw — which contains the latest arts and theater coverage from our intrepid team of journalists & critics.

LA Opera has launched their new season by bringing back their 2006 staging of La Traviata. Director and designer Marta Domingo’s chic concept reimagines and transposes Giuseppe Verdi’s timeless romance to the decadent Roaring Twenties. The spare, almost minimal, sets are buoyed by dazzling flapper-style gowns, wreaths of diamonds and stylish tuxedos to convey the giddy, glitzy world of 1920s Paris, where a naïve young man falls head over heels for a glamorous party girl.

Nino Machaidze, one of LA Opera’s favorite leading ladies, returns to the Dorothy Chandler stage to step into the role of Violetta Valéry for the first time in her career, and truly owns the stage with her magnificent performance. Proving herself more than capable of meeting the vocal challenges of the demanding lead role, Machaidze also beautifully and authentically conveys the depth of emotions of this tragic heroine. Playing her besotted beau Alfredo Germont, Arturo Chacón-Cruz does not fare as well. Initially his voice sounds thin and weak, gaining some strength once he crosses downstage. The young tenor appeared to be in the soprano’s shadow and the two leads seem mismatched in power until Act II, where Chacón-Cruz appeared to gain more confidence. Admittedly, this imbalance does serve the storyline; she’s an upwardly mobile courtesan and he’s a bourgeois milquetoast. Playing Alfredo’s imposing father Giorgio Germont, tenor and LA Opera General Director (and husband to the show’s director) Plácido Domingo brings his legendary status and charisma to the stage. Once again, the relative inexperience of Chacón-Cruz was evident in his Act II duets and scenes with Domingo, whose rich vocal interpretation and gravitas spoke of a decades-long career. Better vocally matched, the duets between Machaidze and Domingo are electric.

While Machaidze’s bright and warm performance is enjoyable, she only sends thrills down your spine once, with Amami, Alfredo, amami quant’io t’amo — “Love me, Alfredo, love me as I love you,” during Violetta’s forlorn duet with Alfredo in Act II, sc ii. Music Director James Conlon conducts with a furious intensity and delicacy.

Former soprano turned director, Marta Domingo has a lot of fun with the 20’s staging, bringing a classic automobile — a rare, collectible vintage Chrysler — onto the stage in Act I for Violetta’s grand entrance. The gypsies of the party scene of Act II, sc ii are reimagined as statuesque ballet dancers, clad in gold helmets and tinkly gold mini dresses. Barefooted, they pirouette and strike angular poses reminiscent of both Egyptian friezes and the automaton from Fritz Lang’s futuristic silent movie classic Metropolis. (Divine choreography is by Kitty McNamee.)  Two of the dancers return in Act III for a brief fantasy scene, where Violetta hallucinates during her final hours. During the overture of Act III, an ailing Violetta lies motionless on a large daybed draped in a white lace coverlet. Behind her, surrealistically, is a backdrop of stars and fine snow cascades and falls upstage. Especially here do we see how the elegant simplicity of Domingo’s staging permits the music to dominate our focus.