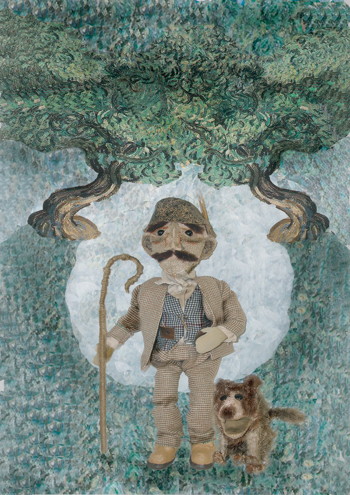 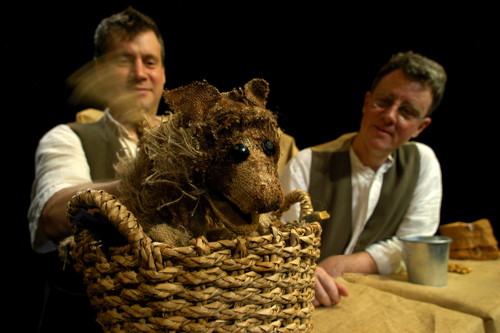 Now playing at the Wallis Annenberg Center for the Performing Arts is a charming puppet show that is super sweet as well as instructive. The Man Who Planted Trees  – from Scotland’s Puppet State Theatre Company — runs on weekends until October 19, 2014.

Based on French author Jean Giono’s 1953 environment-themed classic kids book, and simply told, it’s a story about a man who travelled through the South of France during the early part of the last century. The fundamentally sweet and uplifting story also incorporates dark themes of war and political corruption, making it a sophisticated theatrical experience for older children and adults as well as enchanting smaller children with the funny dog character.

A preamble between the two performers and the audience breaks the ice. Richard Medrington, who plays the narrator and the original book’s author Jean, banters with puppeteer Rick Conte, who voices the dog and also manipulates several other puppets throughout the show, including Elzéard Bouffier —  the titular ‘man who planted trees’. With his bubbly personality and wiggly tail, ‘Dog’ is very amusing and reminiscent of the cheeky British puppet ‘Basil Brush’. Conte voices him with just the right amount of comedic expression without going into the realm of a caricature.

There’s plenty of silly wordplay and cute and funny exchanges between ‘Dog’ and Jean to amuse children. These bits intersperse the somewhat serious but interesting story that spans several decades and two world wars. One especially vivid aspect to this unique show is the company’s use of olfactory stimuli; the performers waft the scents of lavender and also mint over the audience on two separate occasions throughout the one-hour show.

There’s also a free puppet making workshop available before or after the show provided by Rogue Artists in the Wallis rooms – ask for info.

This is a delightful puppet show for young and old — even if you don’t have (or know) any kids, don’t miss this show!

Recommended for ages 7 and above.