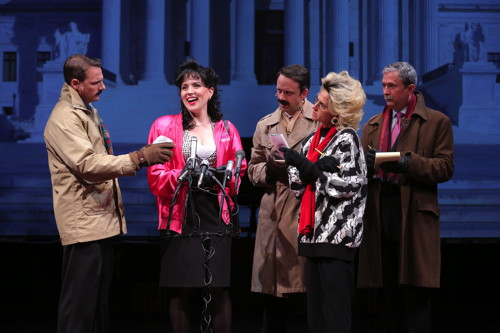 Directed by John Collins and featuring a five-strong cast who take on numerous roles — Maggie Hoffman, Mike Iveson, Vin Knight, Susie Sokol, Ben Williams — the show is a verbatim presentation of a 1991 Supreme Court hearing that is magically transformed into a brilliant theatrical piece by this innovative company.  Scroll down below the photo for more information.

For more info, and to purchase tickets, go here.

Arguendo is a piece that has its genesis in director John Collins’ secret obsession with the U.S. Supreme Court. Since ERS’ Gatz inspired him to research the history of copyright law, including the Supreme Court’s involvement with it, Collins has been inspired by listening to recordings of the High Court’s oral arguments. Years ago, he discovered Barnes v. Glen Theatre, a case involving exotic dancers who insisted that they had a First Amendment right to perform totally nude. They challenged an Indiana law that made nude dancing illegal and their case made it all the way to the highest court in the land.

The oral argument in Barnes is surprisingly accessible to the lay-person and surprisingly entertaining. In it, the justices grapple with such questions as “what is dance?” and “what’s the difference between being nude on stage in an opera and nude on stage at The Kitty Kat Lounge?” The humor, absurdity and inherent theatricality of oral argument in this case make it ripe for ERS’ signature style.

Of course, this will not be merely a recreation of what happens in the courtroom during argument. Like other ERS work of the last few years, this piece will use a verbatim presentation of a non-dramatic text as a starting point. Dance and physical theater are combined with the actors’ carefully studied portrayals of the justices and lawyers in a piece that is physically and visually inventive.

A major visual element of the piece is its projection design. Media artist Ben Rubin, who collaborated with ERS and Mark Hansen on Shuffle and who, along with Hansen, designed the Public Theater’s “Shakespeare Machine,” has created a visually striking field of moving text that forms an animated backdrop for Arguendo. Drawing from the language of The U.S. Constitution, the texts of prior Supreme Court cases as well as a host of other sources ranging from lower court opinions to The Encyclopedia Britannica, the video at once gives insight into the issues of the case and simultaneously provides a dynamic visual counterpart to the actions and words of the performers.

Arguendo is designed to be a thought-provoking piece of theater and performances are often followed by talk-backs with constitutional law scholars and journalists who write about the court. These will not only give audiences a chance to learn more about the history of the case, they will give them a chance to participate, themselves, in the discussion that the Court itself has begun.