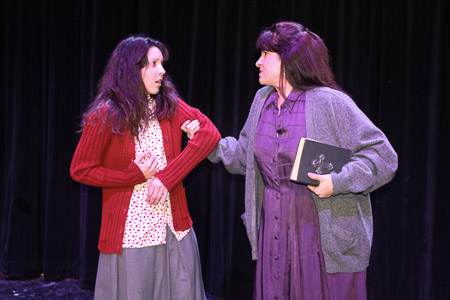 ArtsBeat LA contributor Kurt Gardner recently exchanged the wilds of Hollywood for the wide open spaces of Texas, and he has generously offered to provide us with a taste of the cultural scene in San Antonio and Austin. We’re pleased to present his first theater review here — a revival of one of Broadway’s most legendary flops.

San Antonio theater review of Carrie: the Musical at the Woodlawn Theatre.

Good performances and a solid production help to compensate for the show’s rather weak score.

The curiosity factor is high when it comes to Carrie: the Musical, whose status as a legendary flop still resonates. Its 1988 Broadway debut was met with scathing reviews, and it closed after only five performances with a loss of $7 million dollars. Since then, it’s been revised, retooled and updated, but the question remains — “What’s wrong with Carrie?”

The Woodlawn Theatre is hoping to answer that question with a production that preserves the essence of the story while peppering the script with modern references to contemporary phenomena such as texting and selfies. The familiar cast of characters is here — good girl Sue Snell (Megan McCarthy) and her all-star boyfriend, Tommy Ross (Cody Jones); mean girl Chris Hargensen (Alison Hinojosa) and her asshole boyfriend Billy Nolan (Walter Songer); Chris’s stooge, Norma (Tamara Brem); the compassionate gym teacher, Miss Gardner (Katie Benson); and, of course, Carrie White (Elise Pardue) and her fanatical mother, Margaret (Rebecca Trinidad).

As directed and choreographed by Christopher Rodriguez, Carrie looks and sounds good. Benjamin Grabill’s utilitarian set properly evokes a high school gymnasium, with sections of Carrie’s house on either side to serve as backdrops for key scenes at home. The five-piece band, under the direction of Josh Pepper, sounds great — and the vocal performances are fine.

The problem lies within composer Michael Gore and lyricist Dean Pitchford’s score. When you’re working with such familiar territory as Stephen King’s horror classic, you really need to bring your A-game. Alas, among the 20 songs in the show, only five or six of them really resonate. Too many seem to be treading water, as if they exist merely to fulfill the qualifications of a musical. And since special effects onstage are limited out of necessity, even more pressure is put on the performances to convey the drama.

Here, again, is where Rodriguez’s production comes through. Pardue is fine as Carrie, morphing from timid geek to self-assured young woman with exceptional powers. Hinojosa and Songer are perfect as the high school couple you love to hate, and McCarthy and Jones effectively represent the other side. Benson brings a lot of heart to the role of Miss Gardner, but it’s Trinidad who really stands out as Margaret White. It certainly doesn’t hurt that some of the best songs in the show are given to her, and she delivers them with the emotion and ferocity that the piece needs much more of.