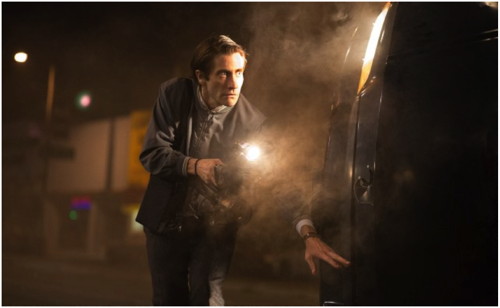 Jake Gyllenhaal is mesmerizing in this entertaining noir about the sleazy underbelly of the L.A. news business.

Louis Bloom (Jake Gyllenhaal) is a small-time thief who drives a junkheap and sells stolen goods to get by. When he brings a load of hot metal to a construction foreman, he inquires about a job, outlining his qualifications as if he’s an upstanding young professional as opposed to a two-bit hustler. Clearly considering him to be delusional, the appalled man tells Bloom that he doesn’t hire thieves. Unperturbed, Louis moves calmly on to his next opportunity.

He passes a car accident on the freeway and is intrigued by camera crews recording the action, so he pulls over. He catches up to one of the videographers, Joe Loder (Bill Paxton), and asks him what he’s doing. Loder explains that he runs a freelance operation that monitors the police band overnight and rushes to scenes of crime and violence that they capture on video and sell to local stations for their morning news shows.

Bloom decides that this could be a good job for him, so he steals a bicycle, pawns it for a camcorder and police scanner, and sets to work. The first scene he arrives at is a carjacking, and he is able to capture gory, close-up footage of the dying victim before being pushed away by the police. Loder is also ordered to stand back, and when he sees that Bloom is the reason for his ejection, he’s furious.

Bloom goes to KWLA, the lowest-rated station in town, and talks his way into the office of the overnight news director, Nina Romina (Rene Russo), who at first brushes him off, saying they’ve already acquired Loder’s stuff. But he insists that he was able to get closer than Loder, so she agrees to take a look. Although the quality is low, his footage is indeed more compelling, so she makes the purchase.

As weeks pass, Bloom continues to supply superior footage to an eager Nina, who compliments his “style,” thus his economic situation improves. He takes on an assistant, the desperate and homeless Rick (Riz Ahmed). He also acquires better video equipment as well as a new vehicle, a cherry-red Mustang that he races at harrowingly high speeds to crime scenes. His reputation in the business increases as well, so much so that Loder comes to offer him a partnership, which he — of course — refuses.

Constantly pressured over ratings, Nina is willing to air the most egregious content, and the morals-free Bloom has no problem manipulating accident scenes to make them more dramatic. But as he descends into the pit, his confidence continues to expand.

Screenwriter/director Dan Gilroy depicts a jaded view of Los Angeles that recalls Nicolas Winding Refn’s 2011 Drive. As captured by cinematographer Robert Elswit, the streets are dark and dangerous, and the city is populated with characters who are either corrupt or corruptible. Bloom is a blatant misanthrope — at one point he even admits to a chronic dislike of humankind — but he provides the juice that other, equally opportunistic people are desperate for.

It’s always admirable to see an actor take a character with no redeeming qualities whatsoever and make him fascinating to watch, and that’s something Gyllenhaal has achieved here. Having dropped nearly 30 pounds to portray this parasite, he’s acquired a hungry, feral mien, and his already large eyes become positively enormous and unblinking.

Bloom is a kind of brethren to De Niro’s Travis Bickle, yet even Bickle had altruistic motives. Bloom is a total sociopath, having created his own persona via online study. His self-righteous diatribes alternate between hilarity and hideousness, and the fact that others even take him seriously is a telling condemnation of society.

Russo’s Nina is similarly tainted. Bouncing from job to job and realizing she’s not getting any younger, she enters into a devil’s pact with Bloom to make sure she’ll continue to be first in line for his footage. Her producer, Frank Kruse (Kevin Rahm), attempts to stand in as the voice of reason, but his quiet objections are easily drowned out by the yowling madness of the news machine. Ahmed’s Rick is equally appalled at the things he’s being forced to do, but his situation and genuine terror of his clearly unhinged employer prevents him from doing anything about it.