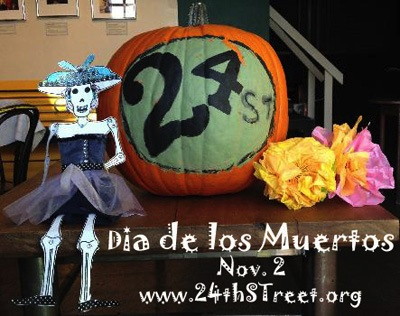 Celebrate the joyous tradition of Mexico’s Day of the Dead 24th STreet style, with music, dance, homemade tamales, face painting, crafts booths and a graveyard where families can make their own altars for their departed loved ones.

“This is a really special event because it brings the local community together every year,” says 24th STreet Theatre artistic director Debbie Devine. “Residents of all ages participate. They cook, bake, decorate, run the booths – or just come down to have fun and enjoy. We close down the theater parking lot and turn it into a beautiful, colorful cemetery.”

Mexican American jazz musician Louie Cruz Beltran blends Afro Cuban rhythms with jazz, Latin jazz, pop and R&B influences. A superbly skilled conguero, timbalero and vocalist, Louie made his debut at the 34th annual Playboy Jazz Festival at the Hollywood Bowl in 2012, prompting Richard Ginell of Variety to write that “the Louie Cruz Beltran Jazz Ensemble was an unexpected triumph of the day.”

Chris Walker, writing in JazzTimes magazine said Beltran “seized attendees’ attention with percolating percussion, stimulating chanting choruses and searing brass arrangements.” Louie was also a hit at the Sunset Jazz Festival (formerly the Concord Jazz Festival), wowing the large crowd with his dynamic rhythm and vocals. Most recently, Louie performed at the Los Angeles Philharmonic/Hollywood Bowl Summer Sounds Series, captivating young and old alike with his passion for performing — and making the acquaintance of 24th STreet Theatre’s Devine who was directing the series.

“Louie, his music and the band were so fun and infectious that I fell in love with them and knew our neighborhood needed to experience it,” she says. “We are thrilled to have him play at this event that is so meaningful to L.A.’s Mexican American communities.”

Celebrate the joyous tradition of Mexico’s most famous holiday with music, dance, homemade tamales, face painting, crafts booths and a graveyard where families can make their own altars for their departed loved ones.

This event is made possible in part by support from Kaiser Permanente West Los Angeles Medical Center, North Area Neighborhood Development Council and City of Los Angeles, Department of Cultural Affairs.