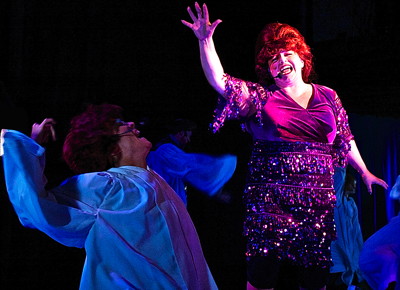 Here follows my latest review for the critical website Stage Raw — which contains the latest arts and theater coverage from our intrepid team of journalists & critics.

The Troubadour Theater Company’s annual Christmas show is a fan favorite, but happily it’s not all about the in-jokes (and there are many) — newbies to the Troubies will certainly get a kick out of this year’s show The Snow QUEEN. It’s a wacky retelling of Hans Christian Andersen’s slightly obscure and dark fairytale about a pair of Danish friends who become separated due to the whim of an evil Snow Queen. Besties Gerda (Misty Cotton) and Kai (Joseph Keane, hilariously channelling the inhabitants of North Dakota with his goofy, thick mid-western accent) are inseparable until Kai crosses paths with the Snow Queen (John Quale), having first been maimed by shards from the evil troll Scaramouche’s magic mirror (Rick Batalla). Gerda sets off on an eventful quest to reclaim her pal.

Directed and narrated by Matt Walker, the one-act, 85-minute show is slick and polished and high energy, right from the start. The show incorporates numerous songs from the rock group Queen, including re-worked lyrics to move their plot along. Excerpts from “Bohemian Rhapsody” become an oft-used refrain, while “Bicycle” becomes “Icicle” and “Crazy Little Thing Called Love” becomes altered to “Crazy Old Lady is Gone” — that sort of thing. The success of this particular show depends heavily on the strength of the cast’s voices. Several of the company are called upon to belt out legendary rocker Freddy Mercury’s vocals — everything from his powerful bass notes to his killer falsetto. Indeed, the cast is more than up to the task, with powerhouse singer in a crazy beehive wig Lisa Valenzuela, Cotton as Gerda and Keane as Kai, even Battala, all bursting forth with versions of classic Queen tunes when needed.

But towards the end…