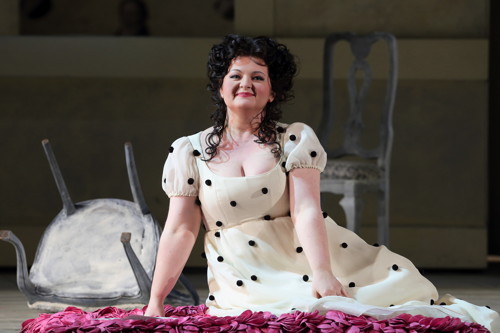 Los Angeles Opera’s inventive Figaro Trilogy continued last Saturday night with the opening of Gioachino Rossini’s The Barber of Seville in a revival of the production from the Teatro Real Madrid, first seen in Los Angeles in 2009. Emilio Sagi’s production, directed by Trevore Ross, was utterly charming. The scenic designs by Llorenç Corbella and costumes by Renata Schussheim — largely rendered in monochrome for most of the evening — provided a visual delight. The sets were presented as a series of abstract architectural elements, all manipulated into place during the opera’s famous overture by a team of dancing ‘Rossinis’ and thereafter reshaped for scene changes by a troupe of extras. These sets were both convincing and attractive and the cast, for the most part, used them quite well to convey the storyline of the opera that will be familiar to longtime opera fans.

In The Barber of Seville, Rossini’s adaptation of the comic play by French playwright Pierre Beaumarchais, the Count Almaviva wishes to marry Rosina, the beautiful ward of the lecherous old Doctor Bartolo. Bartolo in turn wishes to marry Rosina to gain control of her dowry. The resourceful barber Figaro, who helps the citizens of Seville with their problems for a price, comes to the aid of the Count. The Barber of Seville was the first of three plays by Beaumarchais devoted to the character of Figaro and his fellow citizens of Seville; each, in turn, were adapted into operas by several composers, including Mozart, Corigliano and Rossini.

The singers were all interesting.  Rodion Pogossov was a charming, nimble Figaro.  His voice is attractive, but it seems to lack both heft and fullness and was sometimes not audible over the full orchestra. René Barbera, last heard here two seasons ago as Prince Ramiro in Rossini’s La Cenerentola, possesses a gleaming tenore di grazia which has a brilliant top, but sadly he was almost inaudible in the lower reaches.  He sang the role of Count Almaviva complete, including the difficult second act aria “Cessa di più resistere,” — which even in Rossini’s day was frequently cut to spare lesser singers embarrassment. Barbera sang the aria very well; it proved his best singing of the evening and a high point of the performance. Alessandro Corbelli is a veteran buffo baritone and a comic scene-stealer whenever he is on stage. He handled the fast patter of his aria and scenes deftly, but again sometimes disappeared vocally during the louder passages.

The Icelandic bass Kristinn Sigmundsson, as the meddling music master Don Basilio, had no difficulty being heard and used his statuesque presence to comic advantage in every appearance. His ‘Slander’ aria was a highlight, aided and abetted by Corbelli, who mugged and reacted with comic abandon to the booming tones – and the ballooning stage direction.    American mezzo soprano Elizabeth DeShong, in her LA Opera debut, was the star of the night and scored a triumph as Rosina, seemingly doomed to marry the elderly Doctor Bartolo, but pining for the young, handsome Lindoro (the Count in one of many disguises).  DeShong was vocally brilliant from rich low tones to a gleaming top, and was a deft comedienne as well.  She is definitely an artist to watch.

The orchestral playing was quite lovely, many individual details in the score brought out beautifully by LA Opera Music Director James Conlon. In the balance, the overall musical performance seemed a bit inflexible, lacking the last degree of charm and brio that distinguishes the best Rossini playing.  But the performance was ultimately a success and L.A. audiences are fortunate to see and hear Rossini performances of this high level.   LA Opera is to be commended for programming this Figaro trilogy. Beginning with Corigliano’s Ghosts of Versailles, now moving to Rossini’s The Barber of Seville, and concluding later this month with Mozart’s The Marriage of Figaro, as well as additional special performances of other Figaro-related works along the way, the prestigious company gives audiences a chance to really enjoy and appreciate the work that Pierre Beaumarchais created with these characters across three plays. This is truly something to celebrate and it places the Los Angeles Opera at the forefront of American opera companies. Bravo, Bravissimo!

There are five more performances of The Barber of Seville, playing through March 22nd. More information, including performance dates and ticketing, can be found on the LA Opera’s official site.