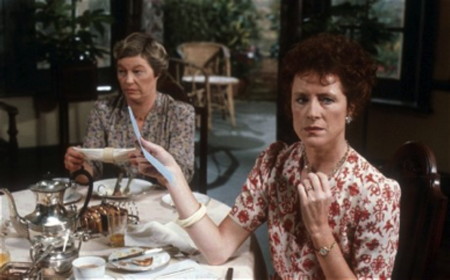 “The Jewel in the Crown” – DVD review

The British television serial about the final days of the British Raj in India during World War II, The Jewel In The Crown, first aired in the UK 1984. It’s hard to believe that 31 years have passed since this extraordinary series was also broadcast on America’s PBS. Now The Jewel In The Crown is available on DVD, with all fourteen-and-a-half hours of the series distributed over five discs.

Based on the “Raj Quartet” novels of British author Paul Scott (published between 1965-1975), the show created stars of Art Malik, Susan Woolridge, Tim Pigott-Smith, Geraldine James, Warren Clarke, and Charles Dance, as well as featuring established British actors such as Judy Parfitt, (Oscar-winner) Dame Peggy Ashcroft, Rachel Kempson, Rosemary Leach and Eric Porter. The series was a watershed in television history, examining the final years of the British Raj (their colonialist hold over India for 300+ years) and its impact on the political, social and religious conflicts there.

Ken Taylor superbly adapted it from the four novels by Scott, and Christopher Morahan brought it to the screen as series creator, sometime director and producer. Beginning in 1942, with the continued stirrings of Indian independence from Great Britain led by the mesmeric leader Gandhi, the political rise of the individual machines headed by Nehru and other leaders, right up to the violent partition which created Pakistan, the series explores how the British gained the message that it was time to leave. These fabulously told tales, interspersed with actual news reels of the day, dove-tail into each other, opening up with the tragic saga of Hari Kumar (Malik) and Daphne Parsons (Woodridge), through an equally tragic story of the elderly Mable Layton (Fabia Drake) and the religious missionary, Miss Batchelor (Ashcroft).

Subtle as it is, the references to hidden homosexuality of the vicious police officer, Ronald Merrick (Pigott-Smith) who tortured Kumar, and Bobbi Batchelor are glorious storytelling at its best.

The title of the series, The Jewel In The Crown, comes from a drawing of Queen Victoria seated on her portable throne in India, a country her ministers described to her as the master jewel in her imperial crown. The five years covered are a successful recap of relatively recent history, told in a masterful manner, using excellent talents both in front of and behind the small screen.

The five discs include bonus coverage such as episode 1 commentary by Malik and Pigott-Smith, commentary from James and Dance on episodes 13 & 14, and producer/director Morahan’s commentary on episode 4. All are worth noting for their background on the months-long shoot.

The Jewel In The Crown